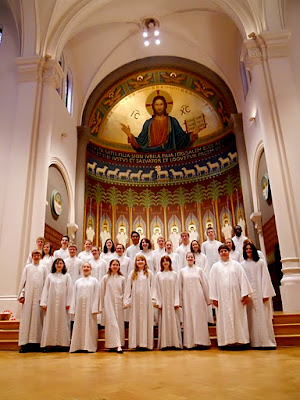 The National Catholic Youth Choir was founded in 2000. The choir is sponsored by Saint John’s School of Theology·Seminary and meets on the grounds of Saint John’s Abbey and University in Collegeville, Minnesota. The choir began under the motto Spreading the Catholic Faith Through Great Music as a response to the call of Pope John Paul II for a “new evangelization.” The choir sings music of various Christian traditions, ranging from medieval Gregorian chant to twentieth-century music and is led by world renowned choral conductor, Dr. Axel Theimer. The primary focus of the choir is liturgical, and the choir seeks to implement the directive of Vatican Council II that the “treasury of sacred music” be preserved and fostered in the modern liturgy.

Up to 45 students entering grades 10, 11, and 12 from across the United States are selected to participate in the choir based on written applications, formal recommendations, and recorded auditions. The two week summer camp generally takes place the last two weeks in June and includes extensive choir rehearsals; repertoire–based classes in religion, music theory, and music history, recreation, recording a CD, daily worship and prayer (Mass, Liturgy of the Hours, Rosary, Benediction of the Blessed Sacrament). They worship together as a group with the Benedictine monks on campus and with the Benedictine sisters in nearby St. Joseph and conclude each day by singing Compline. The choristers also receive cantor training as encouragement for musical ministry in their home parishes and throughout their adult life.

For more information about the choir and to view photo galleries go here.