We have met them, And we are them! 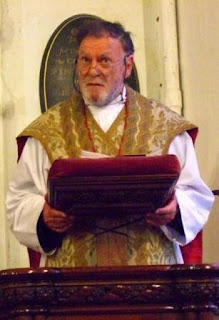 One has to admire curmudgeons. Whether they’re the truly crusty ones as exemplified by Walter Brennan as “The Real McCoy,” or the blustery windbags like Archie Bunker. You can easily fall in love with them. Who didn’t love Art Carney as Harry making his elephant walk journey with cat Tonto in tow? Then comes….Horace Rumpole, or for that matter, any character Leo McKern’s ever inhabited. They can become a cottage industry, on the other hand, for good such as Ed Asner’s forlorn widower in “Up,” or as the ridiculous, scatological William Shatner character on “@#$% My Father Said” that is, if anything, a capitulation to Beavis/SouthPark consumerist zombies.
Well, wake up and if you’ve never met this priest, you should now. Invite him into your daily routine as if he were Orson Welles coming to dinner and taking up residence in your bed.

The fetichising of Vatican II distracts attention from the real and significant and valuable actions of the Roman Magisterium, which deserve so very much better than the sneers directed at them by illiterate fools. Humanae vitae and Ordinatio sacerdotalis, slender volumes, are worth more than all the paper wasted at Vatican II. Documents of the CDF, keeping up with the errors proposed in areas of ethics by the World’s agenda, represent the locus to which perplexed modern Catholics should turn for teaching and guidance.

One Reply to “Curmudgeonry”