Mostly I write with a sense of optimism about our liturgical future. There are so many wonderful signs: Summorum, the new English Missal, the formation of thousands of scholas, a new generation of priests who “get it” as regards the liturgy, growing support from Rome, as well as cultural change at the heart of Catholic life. All of these are fantastic, and I’m deeply grateful to be alive to see it all happening.

And yet, nearly every day I receive notes from people who are still despairing because their own local parish offers nothing that resembles the sights and sounds of Catholicism. There is no chant, the hymns are embarrassing, the musicians and liturgy directors are clueless, the pastor does nothing or is part of the problem, and every week brings another teeth-gritting moment. Many are at their wit’s end.

We should all be sympathetic to their plight. In fact, it is not unreasonable to presume that this is the norm in the overwhelming majority of parishes. It is hard to be optimistic when all the good trends are an abstraction while the bad trends date very far back in history and are the only present reality you experience week to week.

Long experience tells me that a person’s attitude toward the state of affairs in the Catholic Church is determined by their own experience on the ground level. For this reason, it’s a good idea not to dismiss anyone’s perspective on what the real problems and solutions are; one never knows for sure how we might act and believe if we walked in another’s shoes. And truly, it was not that many years ago when I dreaded going to Mass because the music was so offensive. It made me so mad that it would take until Thursday to get over it, and the whole process would start again on Sunday. These were dark times. 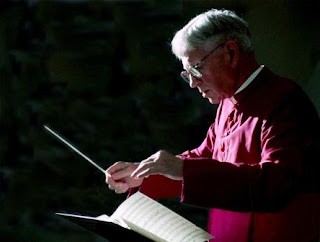 And yet consider this. Even if parish situations are terrible today, the knowledge that change is happening elsewhere can really lift the spirits. What if this were 1966 or so? In these years, most parishes were more or less peaceful but a terrible storm was building right outside the window. For many decades after, we saw very but decline. Standards not only fell but were destroyed. The rules and norms that governed liturgical life for centuries were suddenly thrown out and replaced by improvisation and a near-universal touch/feely ethos.

To be a priest or serious musician in those times was more than a struggle. It was a daily occasion for despair. These were people who had adopted liturgy as their lifetime vocation – and there is only one life. During the whole of their lives, they saw nothing but decline and face little but attacks.

We often hear caricatures of crabby traditionalists who could do nothing during all this time but mutter and complain, but we should be loath to condemn them for this. They were put through a trial most of us can’t even imagine. When they looked at a crucifix, they could identify, and this fact was made all the worse by the reality that their torment seem to be happening at the hands of the Church they had embraced as their true love.

Many in this generation just left. The heros are the people who stuck it out and prepared the way for the current reform. They saw the need to offer a model, to teach and train. They consoled themselves with the hope that some future generation would reap the benefits, all while knowing that they were not likely to see the fruit of their efforts in their lifetimes.

There are hundreds of such people, but let me just mention two that serve as great inspirations to me. The first is Msgr. Richard Schuler, who stood virtually alone in the United States standing for high quality music in his parish (St. Agnes in St. Paul, MN) and never relented in singing the propers of the Mass. It was treated terribly and widely regarded as the last of a dying breed. He kept the Church Music Association of America going despite having no money and very little help. He was a dreamer and an idealist but mostly he had that rare thing: faith that beauty and truth would eventually carry the day. He was ordained in a time of peace and stability in the Church but ended up fighting every day of his life against the trends of his time. But he never gave in, and always did the best that he could with what he had. We all owe him a huge debt.

Another case in point is the legendary chant director Mary Berry of the U.K. Upheaval also defined her life and she had to reinvent even her own vocation in order to survive. But thanks to amazing tenacity and a great deal of creativity, she managed to teach and inspire several generations of students. She did more than that: she entrenched chant (Latin and English) as part of the musical scene during a period in which it might otherwise have disappeared. She was the most generous person, happy to lead anyone to the beauty of liturgical chant. And when she was asked about her struggles, she would always demur and change the subject over to hopeful things. When people would attempt to drag her into controversies, battles, and internecine splits she would refuse. She had a light in front of her that she followed always, and that light was that of Christ. And you know what? The Catholic world is filled with her students today – students not only of music but students of life who have replicated her example. Some of them are in very high positions in Church today, helping to bring reform with gentleness and a loving and generous spirit.

What both of these great people had in common was the willingness to take up a cause themselves, regardless of what people around them or in the press said about them. Grousing and complaining was not their way. Their lives were light, not heat. They love the work. It was the source of their joy. They knew what they had to do and they did it, even though they received few if any personal accolades for their work. This is humility. This is a form of piety. And this is something that we should all hope to emulate. And look what they have left! It’s incredible how the life of one man and one woman can make such a difference in this world. And consistently with the poetic drama of the Christian faith itself, their glory as individuals is only obvious to us and to the world after their deaths.

To be surrounded entirely by decline is a very difficult way to live a life. Despair is a universal human temptation. We should avoid it, refuse it. But how much easier should it be for us in our time than it was for them in their time? If Msgr Schuler could build up a world world-class music program in one parish that became a light to the world, and if Mary Berry could teach thousands and leave behind generations of brilliantly trained scholars and singers, and do all of this in the 1970s and 1980s (!) surely there are things we can all do right where we are. This is the task of our generation. It is our calling. And looking back at the past, we should realize that it is a much lighter burden than theirs.

I too would love to see change sooner rather than later. We’ve waited decades and decades for this. In this time, great men and women have lived hard lives and died before the reform came. Let’s let them be our inspirations as we go forward in our own times to do what we must.