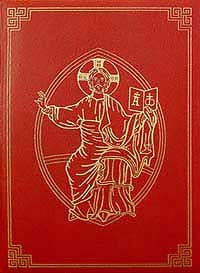 In browsing briefly just a few sections of this new edition of the GIRM, it is clear that we have much to learn and consider as we prepare for the moment of liturgical renewal ahead of us this November. I have decided to dedicate a short series of reflections, then, on this new translation of the GIRM which will explore it in a few different lights.

First, I would like to consider the nature of translation in light of liturgical adaptation–otherwise known as inculturation.

“The first significant measure of inculturation is the translation of liturgical books into the language of the people.” (Varietates Legitimae, the fourth instruction for the right implementation of Sacrosanctum Concilium, 1994 [VL] §53)

The liturgical books of the Roman Rite are normatively promulgated in Latin. Translation of these into the vernacular is done according to the most basic form of inculturation as it was described in Sacrosanctum Concilium and in subsequent instructions. In this basic form of inculturation the Latin Typical Edition remains the normative source and holds the weight of UNIVERSAL LAW. When issues of translation arise, then, consulting the Latin text is often helpful for clarifying the Mind of the Church and the true sense of the text or rubric in question.

We are told in the newly released edition of the GIRM that there is now a “single official translation for the English-speaking world”, which includes 11 English speaking bishops conferences.

While this is a very wonderful aspiration for purposes of unity in the English-speaking world, this description is in a certain way untrue. There will not be a single English language GIRM for all English-speaking conferences. Each will in fact be unique in a few specific places.

What I am speaking of here are the more substantial adaptations (inculturations) of the General Instruction that have been made in each conference according to the competencies given in GIRM 390, which reads:

It is up to the Conferences of Bishops to decide on the adaptations indicated in this General Instruction and in the Order of Mass and, once their decisions have been accorded the recognitio of the Apostolic See, to introduce them into the Missal itself. These adaptations include

Directories or pastoral instructions that the Conferences of Bishops judge useful may, with the prior recognitio of the Apostolic See, be included in the Roman Missal at an appropriate place.

The sections described above, then, have received liturgical adaptation in every bishops conference, and these adaptations, which have been absorbed into the GIRM in that locale, take the force of PARTICULAR LAW.

The Latin version of the General Instruction of the Roman Missal, the Institutio Generalis Missalis Romani, promulated in 2002 by John Paul II, is the universal edition of the Roman Rite and it takes the force of UNIVERSAL LAW.

According to the Code of Canon Law (§12) though, PARTICULAR laws “bind those for whom they were issued”, and thus they trump UNIVERSAL LAW in that region.

What this means is that in the places, listed above, where liturgical adaptations have been made to the GIRM by individual bishops conferences, these become unique to that particular jurisdiction, and their content TRUMPS the same content that is found in the Latin typical edition.

This has many implications. It is very good because it allows for particular instruction to be given according to the unique needs of a region. For example, we have seen in two cases so far a further clarification of language in GIRM 48 for two English speaking conferences: England and Wales, and the United States.

Particular law in the dioceses of England and Wales does not allow for the singing of “alius cantus … congruus” (another suitable song) and requires instead for the singing of either the proper chants of the official liturgical books, or “a song from another collection of psalms and antiphons”. The language used here is much more restrictive than the universal law contained in the Latin typical edition, but it is binding with the force of law in England and Wales since particular law trumps universal law.

We have a similar situation in the United states where the word “liturgical” has been added to “chant” in the adaptations made to GIRM 48 in the dioceses of the US.

“(4) another liturgical chant [may be sung] that is suited to the sacred action, the day, or the time of year, similarly approved by the Conference of Bishops or the Diocesan Bishop.”

The word “liturgical (liturgia)” is not to be found in the Latin typical edition (UNIVERSAL law) in paragraph 48. This one word has been added by the USCCB and has been approved by the Holy See and forms part of the PARTICULAR (binding) law in the United States.

One might ask why one single word is of any significance in this conversation. Some might feel that all of this legal conversation is completely unnecessary. But I believe that the addition of the word “liturgical” to the word “chant” in GIRM 48 does much to speak of the “ontology” of the processional chants of the Mass; that is, the nature of the processional chants. It clarifies the intention of these chants, and is descriptive of its proper role.

Discussion of the nature or ontology of the processional chants of the Mass, as described variously in the binding particular law of different English-speaking regions, will be considered in the next post in this series.