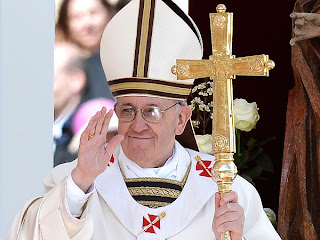 It took the election of Pope Francis to remind me of how utterly idiotic press coverage of the Papacy can be, especially in the early days. Unless you have read absolutely nothing about the new Pope — which would not be a bad idea in the balance — you already know the score. Pope Francis is compassionate, simple, humble, and humane, and this stands in contrast to…wait for it…a certain predecessor whose name shall not be mentioned.

I’m thinking in particular about a BBC short on the Francis’s visit to a juvenile prison in Rome. The BBC reported this as some sort of astonishing first. It added that the Pope’s homily the previous day urged priests to focus on compassion to the less fortunate and not get caught up in trappings and vestments, at which point the camera threw in an image of the certain predecessor who, again, shall not be named wearing full regalia. Never mind that Benedict himself made a visit to the same prison in 2007 and the videos of that extraordinary and moving visit are all over the web.

This has been the unrelenting theme of the press: Pope Francis vs. Benedict XVI. They are covering this in an identical fashion to the way they cover presidential politics. Francis is Obama and Benedict is Bush. Us vs. Them. Liberals vs. Conservatives. Progressives vs. Reactionaries. It’s the only model they know and they cram all existing reality into that model, mainly as an effort to sell their newsprint. I have no doubt that Pope Francis would be astonished to discover that this is being done, and even more surprised that people are going along with it.

I’ve had many flashbacks to the election of Benedict XVI. Here is a man who writings I had devoured for years. I had my own mental dossier on him. I knew from his writings that he was an old-fashioned liberal in the great 19th century tradition of that term, like Cardinal Newman and Lord Acton. I knew that he had been steeped in the German theological tradition of that period. I knew that he was utterly and completely dedicated to the proposition of religious liberty as the foundation of how the Church interacts with the world. I knew Benedict would not be about laws and impositions but rather inspiration and liberality. Specifically, I knew for certain, based on his writings, that he would seek to liberate tradition from the chains that the so-called progressives had put around it. I knew that he had a compassionate heart and a broad mind and would fearless engage anyone on crucial topics. I knew that he was more about conversation than excommunication.

So, I was absolutely astonished to see the way the press treated his election. The rap sheet on Ratzinger read: reactionary, pit bull, crack-down man, and even proto-Nazi. Think Torquemada and you have the archetype. It was so unjust and so vicious. And malicious. Everything Benedict did during his papacy was interpreted in that light. He pursued fantastic ecumenical activities that promoted peace and understanding and yet he was derided as a man who set back Catholic-Muslim relations. He was showing compassion to those estranged from the mainline of the Church but his efforts were fobbed off as giving approval to people who denied the Holocaust. It was like he couldn’t escape the label of that worst of all possible things: conservative (boo hiss, goes the press). Then of course there were the scandals, and many journalists even took the ghastly step of implicated Benedict himself because he had somehow approved of someone who approved of someone who approved of someone who had been been accused in the scandals. They would stop at nothing to confirm their biases and harm this great man.

And so, fast forward to the election of Pope Francis. Nearly all the coverage from morning until night has been about how he is the anti-Benedict. This coverage has been enormously harmful not only to the faith but also to Francis himself. For all we knew. Francis might be more temperamentally severe on issues of doctrine and morality that Benedict, but it doesn’t matter because this doesn’t fit the hyper-politicized prototypes that pre-exist in the files of writers at the BBC, New York Times, CNN, and all the rest.

So you really must ask yourself: has your understanding of this new Pope been compromised by taking these press reports too seriously? I’m pretty sure that I had been overly influenced by them in the early days. I had been observing patterns of behavior of this new Pope, mixing them with hopped-up news coveraged, feeling a terrible sense of sadness about the resignation of Benedict my hero, and coming to conclusions that were wildly unjustified. So far the papacy of Francis has been an added value to Benedict’s own and not a displacement.

Also and regrettably, Pope Francis has given the press plenty of fodder to fuel these archetypes. His personal style throughout his priesthood has been to embrace the lifestyle of the people he served. He rode on buses in Argentina. He wore plain and severe clothing. He mixed it up with everyone and encouraged the priest to do the same. This is a country where the faith is under severe strain, and his commitment to evangelism made it imperative that the Church not seem like a branch of the state, isolated and protected and privileged. He is dedicated this, just as Benedict was and is.

He has brought that sensibility with him to the Papacy. It could end up being a great gift to the cause of evangelism. And there is a sense in which I do not even slightly regret the hugely positive coverage that his papacy has so far elicited. We really do need this right now. There is no question that this Pope has certain gifts that can help in many ways. Benedict had great gifts too as a theologian, liturgist, and as a teacher in every way. There is no reason to set one against the other.

And yet there is one area in which it is all too easy to set Francis against Benedict and that concerns liturgy, the subject I feel an intense passion about. Francis — sadly in my view — seems very much uninterested in the topic. He doesn’t sing. He doesn’t follow rubrics from the Missal or the GIRM. He used Holy Thursday to establish a dramatic new demographic precedent in the foot washing ceremony. People have explained this by pointing out that he is, after all, a Jesuit, and every Catholic knows what that means, hint hint nudge nudge. Others who have worked with him over the years point out that his non-interest in liturgy stems from his personal style. Quite frankly, one associate told me, “he is a slob.” It was an affectionate comment but still: ouch. This is indeed a contrast from Benedict. It is never a good thing to have the Pope himself flout rubrics even if inadvertently. And yet we are most likely going to have to get used to this. It is going to be commonplace.

Consider the Holy Thursday event when Pope Francis presided over liturgy at the kids’ prison. He washed the feet of young women. This is significant because the liturgy’s purpose is to recreate the time when Christ’s humbled himself to wash his apostle’s feet. It is repeated in liturgy as a sign of the priesthood with the celebrant taking on the person of Christ. The washing of women’s feet might be seen as a foreshadowing of a women’s priesthood — or so the “progressives” might suggest. But actually, if you consider this from the point of view of the Pope, he was there and not exactly in a position to separate boys and girls in their liturgical roles. Such an endeavor would probably have struck him as pointless or even cruel. Given that he tends to see the liturgy as less a veritical symbol and more a horizontal form of human service — a seeming position I deeply regret, to be sure, because it seems less than fully informed — his choice here makes perfect sense.

The big question is whether the new Pope is going to continue chipping away at the rubrics and the liturgical traditions in a way that damages Benedict’s legacy. I seriously doubt that, but even if it does happen, it would again seem to be an inadvertent result. It does strike me as irresponsible that the Pope is not more attentive to these matters, and I do wish that he could have spent more time during the last ten years in a deeper study of Benedict’s own writings on liturgy. And perhaps that time will come. But whether he does or not is irrelevant for the continuing veracity, wisdom, and influence of Benedict’s own writings.

Regarding one of the Pope’s messages that priests should be more willing to sacrifice, let me add one final regret on one possible interpretation of this position. I’ve never known a priest who has not known intense sacrifice in their daily lives. They are called upon to do service to others at a level of intensity unknown by the rest of us. They are poor. They are pulled and tugged on at every turn. They exhaust themselves in service, and even get burned out as a result. Most of what they hear from the faithful consists of complaints that they aren’t doing more. Follow a priest around for a day or two and you will be astonished. It is awe inspiring.

This is also true of other servants of the faith such as musicians and teachers. They all sacrifice income and prestige, and suffer deeply for their choice. This is the current reality. The idea that the Church consists of big shots in ermine robes living it up at the expense of the faithful, luxuriating in finery and comfort, is absurd and insulting and even plays to anti-Catholic stereotypes. I don’t believe that Pope Francis has intended to leave the impression that he agrees with the caricature but it would still be wise to see that this is a way his words can be taken and twisted by the press that doesn’t understand or appreciate the extent to which any Church work is undertaken with deep humility in our uncomprehending world.

I’ll offer one final example concerning the chasm between press coverage and reality. The blogs were filling up with announcements that the new Pope had already enacted a “liturgical revolution.” Startling, right? Well, I watched the Palm Sunday services at the Vatican. All the chants of the Grauale Romanum were there, including the real Graduale as a replacement for the Responsorial Psalm. In the scheme of history, this is an amazing restoration, already a precedent in Vatican liturgy. You might say: oh that was already planned. Maybe. But what matters here is whether the Pope has the incentive or the desire to change the precedent. I see no evidence that he does. What I do see is a serious and dedicated servant of the faith who hopes to bring his unique gifts to the institution in a time of great need.

To be sure, we might face some harrowing days ahead. It is crucial that observers keep on eye on the reality, not the spin.