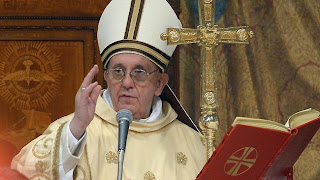 If I live to see another Papal transition, someone remind me to turn off the television set and not read any news on the topic for two weeks.

This last experience has convinced me that after a fortnight, the subject changes anyway. Just look around and notice that the dogs have been called off. Normalcy is restored. The news cycle is over. The Pope is teaching the faith. The liturgy continues as before. The Catholic Church lives.

In swearing off the press the next time, I also know that this is impossible. Catholics really care about the Pope. A papal transition is a wonderful time for Catholics because our friends who otherwise think nothing of our religion come up to us and say; “congratulations on your new Pope!” And we say “thanks” with an inner feeling of joy that someone noticed something that is really important to us.

We all feel a hint and pride in our faith, and that’s a nice thing every once in awhile.

And then there’s the mass media. They are populated by reporters who normally pay no attention to Catholicism. And they are looking for a story. They must populate their stories with content.

These people are extremely risk averse, and want nothing more than to fit in to the prevailing ethos. So they gravitate to the conventional wisdom.

Without hours Pope Francis’s election, the conventional media wisdom — the tableau they would paint a million times over a two-week period — was ridiculous in retrospect. The idea was that Pope Francis was the anti-Benedict, and, hence, everything the new Pope did was somehow designed to rebuke the previous Pope and maybe every previous Pope. Grab some popcorn and watch as the new Pope dismantles the old-time religion!

Everything was interpreted in this light. If he took the bus instead of the car reserved for him, the media would shout: oh look here, Pope Francis is showing the world that he is against all the Papal pomp that Benedict was throwing around. If Francis said he cares about the poor, the media would go nuts: oh look, unlike Benedict, this Pope is for the poor! If the Pope’s homily said good things about humility, the press would scream: oh look, it is certain death for the legacy of Benedict and the arrogance of the Papal court! If Pope Francis urged curial reform, the press would say: look how he is ridding the Church of the ghastly corruption of his predecessor!

So on it went. Every hour, every day. For a while, I’m sorry to say, I sort of bought into it all in a certain respect. I wondered if the Benedict legacy was coming under fire, if perhaps what he had done in so many areas would be undone by the successor. I worried that maybe not enough time had passed to entrench the shifts the Benedict had made.

The press reports kept coming in. And they grew ever more absurd. If you knew nothing else about the Catholic Church and just watched the television, you would have thought that the new Pope’s agenda was the overthrow of Catholicism as we know it. That was the story line. That was the crazy notion that most every big-media outlet kept pushing.

What was especially revealing — and this came as a shock to me — was how there was a faction of Catholic opinion that jumped on this whole thing and served as a kind of echo chamber for the regular press. Everything they reported about Pope Francis seemed to have the following subtext: “Pope Francis is giving the ‘what for’ to fans of Benedict and undoing everything from this last Papacy. The bad guys are out. We have taken back power, and now you will suffer for your reactionary ways.”

It was all quite disturbing. Maybe I’m naive but I had no idea that Benedict’s Papacy had apparently been a problem for so many of the Catholic pundit class for so long. It’s like had built up a long-running resentment against him and what he did. They were using the new Papacy as the moment to unleash pent up resentments. It was all pouring out with a fury.

It actually amazes me because in my own view that main legacy of the Benedict Papacy can be summarized in one word: liberalization. He freed the Catholic world of its entrenched bias against the past and opened up new opportunities to embrace our long tradition. He did it all not through imposition but through inspiration. He flung up the door that had been sealed in the mid sixties and invited everyone to explore the treasures and beauty. That is his legacy.

I can’t even imagine how such actions could engender resentment! But there it is. And the resentment was so intense that it actually gave rise to hallucinations. One normally savvy writer actually proclaimed that the new Pope was enacting a fast and furious “liturgical revolution” because he fumbled a few of the rubrics or used the Papal cross of John Paul II (before the following week when the new Pope shifted to using Benedict’s Papal cross). Another said that because the new Pope prefers Italian as the liturgical language, this represents a repudiation of the restoration of Latin.

You can tell so much about a mindset of a person by the things he thinks he sees that aren’t really there. It should be rather obvious by now that the Pope Francis has no interest whatsoever in enacting some kind of liturgical revolution. In fact, he doesn’t seem to have an intense interest in liturgy at all. And you know what? That’s perfectly. Every Pope has gifts that he brings to the Church. What Benedict brought was a particular interest of mine, and that’s great. But that doesn’t mean that Pope Francis’s emphasis on evangelism and service represents some kind of distraction.

The Benedict legacy on liturgy will survive and thrive. So will the Catholic faith and the Catholic Church. Sorry big media: your death wish for Catholicism and the legacy of Benedict XVI is not going to come true. Now that the world media has discovered this reality, they have moved on.