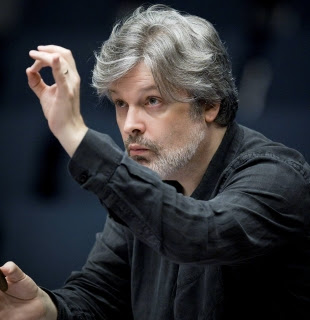 James MacMillan, one of the most acclaimed Catholic composers of our time, has written a piece for the May-June edition of Faith Magazine entitled Liturgical Renewal and Church Music in which he assess the state of the renewal of sacred music today.
He describes many of the resources that he uses in his own parish in Glasgow, Scotland, some of which are publications of the CMAA.
It is a joy and honor to know that a musician of MacMillan’s caliber finds these resources from our shores useful in his own work of liturgical renewal on the ground. I wonder if the kind maestro might consider offering to us in turn some work drawn from his own compositional genius that sets the Proper of the Mass in polyphonic or choral settings? What a gift to us all this would be!
Here is an excerpt from his piece:

My own activities in the field of liturgy have centred on my involvement with Glasgow’s Dominican community. Since 2005, I have served as choirmaster at St Columba’s in Maryhill. Our little choir comprises volunteers from within the parish, many of whom cannot read music. When we started, the congregation was accustomed to singing four vaguely apposite hymns slotted into the liturgy; in short, they were singing at Mass, rather than singing the Mass. Over the past seven years this approach has been altered to give chant (mostly in the vernacular) “pride of place”, as instructed by Vatican II.

Moreover, instead of replacing the Mass Propers with hymns, the assembly have starting singing these important prescribed texts, using a range of accessible resources. Of course the ideal source to which we aspire is the Graduate Romanum itself, the single most important book for any Catholic choir and the definitive source of Gregorian chant. Much of this chant is, however, beyond our choir at this stage in its development, which is why we have sought out a range of other chant resources – staging posts, as it were, on our path of liturgical betterment, and with the congregation’s involvement foremost in mind.

There’s the Graduate [sic] Simplex, published by the Church for smaller churches just like ours, with a range of Mass Propers for each liturgical season. There are also many exciting chant adaptations in English, clearly devised for congregations, which are well within the capabilities of ordinary parishes. The Graduate Parvum, now being completed by the Blessed John Henry Newman Institute of Liturgical Music in Birmingham, offers simple and extremely usable chant Propers in both English and Latin, drawn from a range of authentic Gregorian sources. Our congregation is gradually assimilating some of these. Then there’s the Simple English Propers by Adam Bartlett: easy, freely composed chant Propers for every Mass of the year. We use at least one of these almost every Sunday. Our choir is becoming more fluent in this idiom all the time. Recently, we have been able to introduce Communion antiphons from the Graduate Romanum. A richly rewarding American publication is By Flowing Waters by Paul F Ford; it’s a large and full collection of chant-based liturgical song. Those who find their prayer heightened by the modality and supple rhythms of chant will find great riches in these collections. Whether in Latin or the vernacular, chant is an integral and important part of our Christian heritage and living tradition. A step in its direction is a step towards a deeper look at the meaning of liturgical renewal and its musical implementation. This music is for those parishes and communities who are serious about the liturgy, and singing the liturgy.

Please read the rest there.