I was in the library the other day here at the Liturgical Institute in Mundelein and, while doing some research on Ambrosian chant, I stumbled across a little tract on the shelf by the father of Gregorian Semiology, Dom Eugene Cardine. The little book, published in 1964, was entitled: Is Gregorian Chant Measured Music? A Critique of the Book by Dr. J. W. A. Vollaerts, S.J. “Rhythmic Proportions in Early Medieval Ecclesiastical Chant”.

The topic is naturally of great interest to me, but I was especially intrigued by this because I have recently observed some adherents to Vollaerts’ (as well as Dom Gregory Murray’s) mensuralism who describe themselves as semiologists who have produced chant interpretations that are strikingly different from anything that I have ever taken from Cardine.

So I opened the book to have a look and found a pleasant surprise: 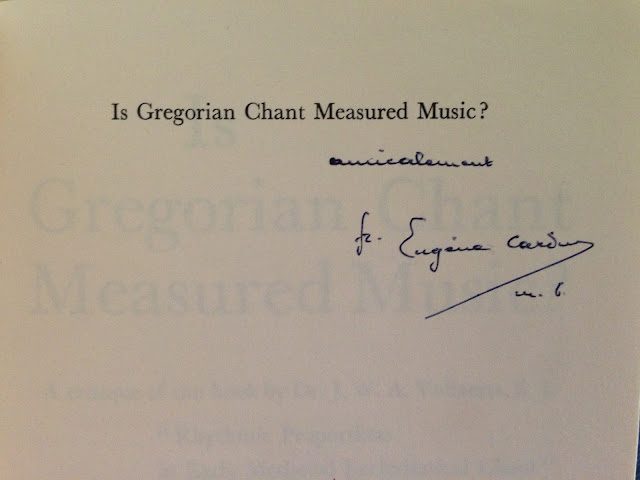 The cover page bears Cardine’s signature along with a number “6” which perhaps suggests that this was the sixth copy to go out. There is also a valediction inscribed in French which I could not at first make out.

So I took a picture of the page and sent it to my trusted chant teacher and mentor, Fr. Columba Kelly, OSB, who completed doctoral studies in Gregorian Musicology under Cardine in Rome in 1963 and I thought that this might bring back some memories for him. Indeed it did. He wrote back:

The word is musicalment, the French word for musically. It is a barb against the mensurastical type of approach to chant!

I did a master’s thesis on Vollaerts, the result of which he has included in his rebuttal of Murray and Vollaerts.

Needless to say, he was familiar with the tract!

I find Cardine’s wry wit in this little memento to be quite charming and endearing, actually. Every time that I talk with Fr. Columba I can almost hear Cardine speaking through him. I will never understand why this treasure of a scholar has been so overlooked in our times. Anyone who has the opportunity to study with this giant who is now in his 82nd year should definitely not pass it up!

[Update/Correction: Commenters have informed me that the valediction is “amicalement”, meaning “friendly yours”, and what I thought was a number 6 is actually a common French abbreviation for the Benedictine order, “moine bénédictin”.]

7 Replies to “A pleasant surprise from Cardine”