I’ve had the opportunity to give some talks on fundamental principles of sacred music and an introduction to the Traditional Latin Mass over the last few weeks.  In all the sessions, the following question came up:

It’s a question I’ve asked myself on a number of occasions.

Reading about Mrs. Justine Ward and the 1920 Gregorian chant congress with thousands of children chanting the Mass – How did this phenomenon evaporate?

Music in Catholic Worship by the USCCB – How did this document ever get published?

Who ever thought the hootenanny Mass was a good idea? 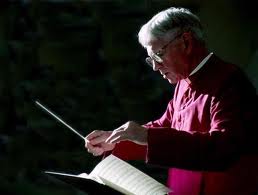 Fortunately, the CMAA’s patrimony includes the heroic efforts of Msgr. Richard J. Schuler, the longtime president of the CMAA and editor of Sacred Music, the CMAA’s journal. Msgr. Schuler saw it all, and endured it all, often standing with only a few others in the cause which the CMAA still champions.

One of his most significant literary contributions to the cause of sacred music is this article entitled “A Chronicle of the Reform: Catholic Music in the 20th Century.” This essay is a must-read for anyone who to avoid the mistakes of the past and move forward with prudence.  See for example this excerpt:

Typical and perhaps most interesting of the innovations engineered through the Music Advisory Board by Father McManus, Father Diekmann and Father Weakland was the “hootenanny Mass.” The scenario began in April 1965, when Father Diekmann delivered an address entitled “Liturgical Renewal and the Student Mass” at the convention of the National Catholic Educational Association in New York. In his speech, he called for the use of the “hootenanny Mass” as a means of worship for high school students. This was the kickoff of a determined campaign on the part of the Liturgical Conference to establish the use of profane music in the liturgy celebrated in the United States. Universa Laus had already begun a similar effort in Europe. In September 1965, the Catholic press began to carry reports of the use of hootenanny music by those in charge of college and high school student worship. In February 1966, the Music Advisory Board was called to meet in Chicago, with an agendum that included a proposal for the use of guitars and so-called “folk music” in the liturgy. It was clear at the meeting that both Fr. McManus and Archabbot Weakland were most anxious to obtain the board’s approval. The Archabbot told of the success of such “experiments” at his college in Latrobe, Pennsylvania, where, during Mass, the students had enthusiastically sung, “He’s got the Archabbot in the palm of His hand.” Vigorous debate considerably altered the original proposal, and a much modified statement about “music for special groups” was finally approved by a majority of one, late in the day when many members already had left. But once the rubber stamp had been applied, the intensity of the debate and the narrow margin of the vote were immediately forgotten. The Music Advisory Board had fulfilled its function; it had been used.

The press took over. American newspapers, both secular and ecclesiastical, announced that the American bishops had approved of the use of guitars, folk music and the hootenanny Mass. Despite repeated statements from the Holy See prohibiting the use of secular music and words in the liturgy, the movement continued to be promoted in the United States and in Europe. Deception played a part, since American priests were allowed to think that the decision of the Music Advisory Board was an order from the bishops themselves. In reality, an advisory board has no legislative authority, nor does a committee of bishops have such authority. Decisions on liturgical matters need the approval of the entire body of bishops after a committee has received the report of its advisors and submitted its own recommendations to the full body. The hootenanny Mass never came to the full body of bishops; it did not have to. The intended effect had been achieved through the announcement of the action of the Music Advisory Board and the publicity given to it by the national press. It was not honest, and further, it was against the expressed wishes and legislation of the Church.

There are other examples of the introduction of the ideas of Universa Laus and the progressive liturgists that involved confusion and even deceit. The gullibility of the American clergy and their willingness to obey was used. A confusion was fostered in the minds of priests between the Bishops’ Committee on the Liturgy and the Liturgical Conference, which indeed had interlocking directorates. As anticipated, most American priests failed to distinguish between the releases that came from them, taking the proclamations of both as being the will of their bishops. Meanwhile, the official directives of the post-conciliar commissions in Rome rarely reached most American priests. They knew only the commentaries on them provided by the liturgists both nationally and on the diocesan level. As a result, the altars of most American churches were turned versus populum; choirs were disbanded; Gregorian chant was prohibited; Latin was forbidden for celebration of the Mass in many dioceses; church furniture and statuary were discarded. These innovations which distressed untold numbers of Catholics were thought to be the orders of the Second Vatican Council. Rather, they were the results of a conspiracy whose foundations and intentions have yet to be completely discovered and revealed.

And Msgr. Schuler’s solution planted the seeds which we see sprouting in some places today, and flourishing in others:

What must be taken as the basis for putting the reform back on the track in this country? Simply, a full and impartial acceptance of all directives, conciliar, papal and curial. That means the use of Latin as well as the vernacular, the fostering of choirs as well as congregational singing, the acceptance of the distinction between sung and spoken liturgy, the creation of new serious music as -well as the use of the great works of the past. Above all it means that the distinction between sacred and profane must be held to, along with the admission that a professional judgment must be made on the artistic merit of musical composition. In a word, the reform must be put in the hands of educated, professional musicians who are dedicated to carrying out the wishes of the Church as expressed in the documents. The same malaise that afflicted, this country when the reforms of Pope Pius X were promulgated still persists. It is still a question of education, an understanding of what the Church wants and a willingness and an expertise to carry it forward. 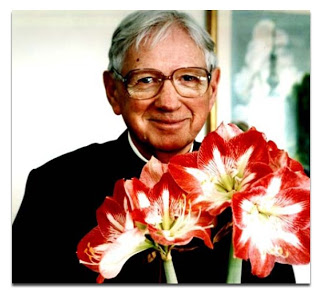 In the 2013-2014 season, the Twin Cities Catholic Chorale, which Schuler founded and directed, will celebrate its 40th season of residency at Saint Agnes Church in Saint Paul, Minnesota.  The parish has served as an incubator for vocations for the Archdiocese (including a few [arch]bishops) and carried on Schuler’s legacy of commitment to the Liturgical Movement and authentic vision of actuosa participatio in the sacred liturgy and her sacred music.

The CMAA is hosting a conference celebrating that legacy on October 13-15, 2013 at Saint Agnes and Saint Paul Cathedral.  We hope you’ll join us as we look forward to the future with profound thanksgiving for Monsignor’s work.

13 Replies to “What Happened?”