I recently had a conversation with a church musician friend about her parish.  She is a Protestant cantor in a Catholic church.  At one point she exclaimed, “I don’t know what’s the matter with most of those people.  They sing all the Mass parts, but they won’t touch the hymnals.”

Lacking time for a detailed review of liturgy and history, I just said, “It’s a Catholic thing.”  I guess I’ll catch her up later on the integral role of the ordinary parts of the Mass. 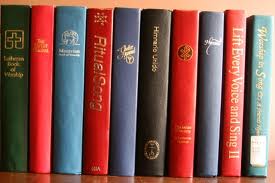 4 Replies to “The Congregations Gets It!”