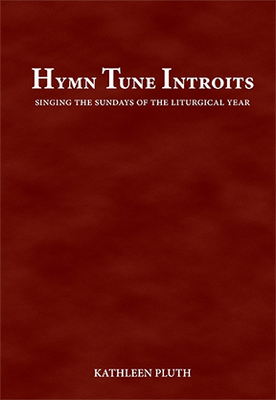 As the new parish year is about to begin, I thought I would mention again my recent booklet published by WLP, Hymn Tune Introits: Singing the Sundays of the Liturgical Year.

Many pastors are aware of the benefits of “singing the Mass,” as opposed to simply singing at Mass. The Church opens the Scriptures to us in many ways at the liturgy, not only through the lectigh onary, but with particular generosity through the Propers of the Mass.

Over the last decade the Church in the United States has experienced an historically important publishing explosion in English-language versions of the Propers for use at Mass for the benefit of the People of God. While the Graduale remains the gold standard for singing the Propers, composers such as Paul Ford, Richard Rice, Adam Bartlett, and many others have worked out ways to bring the Proper texts closer to the people, making these wonderfully rich texts available for choir and/or congregational singing. Ben Yanke maintains an enormous database with links of these resources for singing the Propers.

The Hymn Tune Introits go one step further, making the Entrance Antiphon of the day accessible to every congregation in the English-speaking world.

Every congregation knows at least one Long Meter hymn tune. And every text in this entire book can be sung to that tune.

If a parish knows All People That on Earth Do Dwell, they can sing each of these texts to that tune. They work equally well with the tunes for Creator of the Stars of Night, or Jesus Shall Reign. Or On Jordan’s Bank, Lift Up Your Heads, O Sun of Justice, When I Survey–many others. A lack of musical resources is therefore no obstacle for any parish.

Experience shows that the introduction of Propers can be unsettling for congregations, for two reasons. First, it offers something new, which always causes some initial resistance. Secondly, and this is important, it takes away something the congregation is used to. Of course, the point is precisely the opposite: making the riches of the Mass available to the congregation–but it will not be perceived that way initially, and this is the pastoral problem that the Hymn Tune Introits are designed to solve. Congregations that are accustomed to singing a hymn to begin the Mass, and would be unsettled by any chanted Proper, may much more readily make that transition by singing something that sounds just like a familiar hymn.

Imagine it is Sunday morning, and time for Mass to begin. The organ begins to play, the Entrance Procession begins, and as the musical introduction reaches its conclusion, the people think, “Oh, I know that song!” They pick up their worship leaflets and find the Entrance Chant, and without any rehearsal or fumbling they sing it straight through. The ministers have reached the altar, the organist improvises as the altar is venerated, and the priest reaches his chair.

Alternatively, imagine that a parish that is poor, and between organists, is ready to begin Mass. Someone designated as cantor, or the priest, sings out the first line of the Hymn Tune Introit. Once again, everyone “knows this song,” and all join in.

A “contemporary ensemble” of guitar/piano would have equal success.

For too long, the People of God have been deprived of some of their rightful meditations: those provided for them in the Proper texts of the Mass. I’m happy to be involved in some small way in helping to spread this banquet of the Word of God for the nourishment of all.