The following concert announcement comes to us from Friend of the Cafe Peter Kwasniewski.

I am very happy to announce an upcoming concert of my sacred choral works, including several premieres, to be sung by The Ecclesia Choir under the direction of Timothy Woods. The concert will held at St. John Cantius Catholic Church in Chicago on Sunday, June 25, at 3:30 pm.

Here is a preview of the concert program:

PART I: Music of the Holy Triduum

Tickets may be pre-ordered at Eventbrite. Tickets will also be available at the door.

Please help spread the word among lovers of sacred music who live in the greater Chicago area. I will be there (of course…) and greatly look forward to meeting people before and afterwards! In case you didn’t know, we are going to Mars.

When humanity flings itself into the inky blackness of the nearby heavens, will the silly songs of contemporary worshiptainment be an adequate musical expression of this endeavor?

When the first priest arrives on Mars, and says the first Mass on another world, what sort of music could possibly match the profound human accomplishment, and the divine inspiration, that got him there?

If you want to be welcoming as a church, it’s important not to use special “insider” language. People don’t want to try things if they don’t know the words.

The first is the full-color facsimile edition of the 1903 Cantus Mariales. This reproduction contains 50 Marian chants for use throughout the liturgical year. Prof. Kwasniewski also produced several recordings of chants from the collection, with (beautiful!) harp accompaniment.

The book is for sale on Amazon.

The second is a collection of works by Kwasniewski himself. His collection of sacred choral music was published by Corpus Christi Watershed in 2014. A series of recordings has now been made.

You can find the rest of the videos at the New Liturgical Movement.

The following is from Chris Mueller:

Many of you know that World Youth Day is an event convened every 2-3 years, where high school and college-aged kids and young adults from all over the world gather in some large international city (e.g. Cologne, Sydney, Madrid…) for a week, to celebrate Mass, meet the Pope (or at least be near him), and grow in their faith. This event is huge – millions of young people convene every time it happens! In fact, World Youth Day 1995 in Manila held the record for the largest-ever papal event, when over five million pilgrims gathered for Mass with Pope St. John Paul II. (That record was recently broken when Pope Francis celebrated a Mass for over six million people… in Manila!)

This summer World Youth Day will be held in Krakow, Poland, and I have the honor of having been invited to conduct all the music at the English-language Masses! There are so many English-speaking pilgrims that these Masses will be held in a giant stadium. There will be a morning Mass each day, for five consecutive days.

Additionally, my family, which sings polyphony and chant together as the Mueller Family Schola, has been invited to give a concert as one of the cultural events that take place each evening at this enormous gathering. And my wife and kids will not only be present for our concert, but they’ll be joining me to sing at all the Masses I’ll be conducting as well.

One of my goals is to incorporate polyphony and chant into every Mass. I think it would be amazing to set a kind of liturgical template that youth from all over the world would take back to their parishes. “We heard all this beautiful music at the Masses in Poland – can’t we have that same music at our own church?” I’ve been working closely with Dominican Friars from the United States and Poland as we carefully plan all these liturgies. And we expect a pretty big choir!

But here’s where I need your help:

In order to direct the wonderful music this July in Krakow, my family and I first have to get to Krakow. And so I’m asking if you would support our Kickstarter campaign, to help us raise enough funds to bring gorgeous polyphony, beautiful chant, and ourselves to Poland. We would be very grateful for your help, and we promise to pray for you unceasingly in our gratitude!

Thank you for your kind consideration and for your support –

I believe in one Lord Jesus Christ,
the Only Begotten Son of God,
* born of the Father before all ages.

God from God, Light from Light,
true God from true God,
begotten, not made,
consubstantial with the Father;
* through him all things were made.

For us men and for our salvation
he came down from heaven,
and by the Holy Spirit was incarnate of the Virgin Mary,
*and became– man.

For our sake he was crucified under Pontius Pilate,
he suffered death and was buried,
and rose again on the third day
* in accordance with the Scriptures.

He ascended into heaven
* and is seated at the right hand of the Father.

He will come again in glory
to judge the living and the dead
* and his kingdom will have no end.

I believe in one, holy, catholic and apostolic Church.
I confess one Baptism for the forgiveness of sins
and I look forward to the resurrection of the dead
* and the life of the world to come.

For our Protestant friends, you can find this setting with the BCP/ICET and Enriching our Worship texts, and also a recording of that translation. 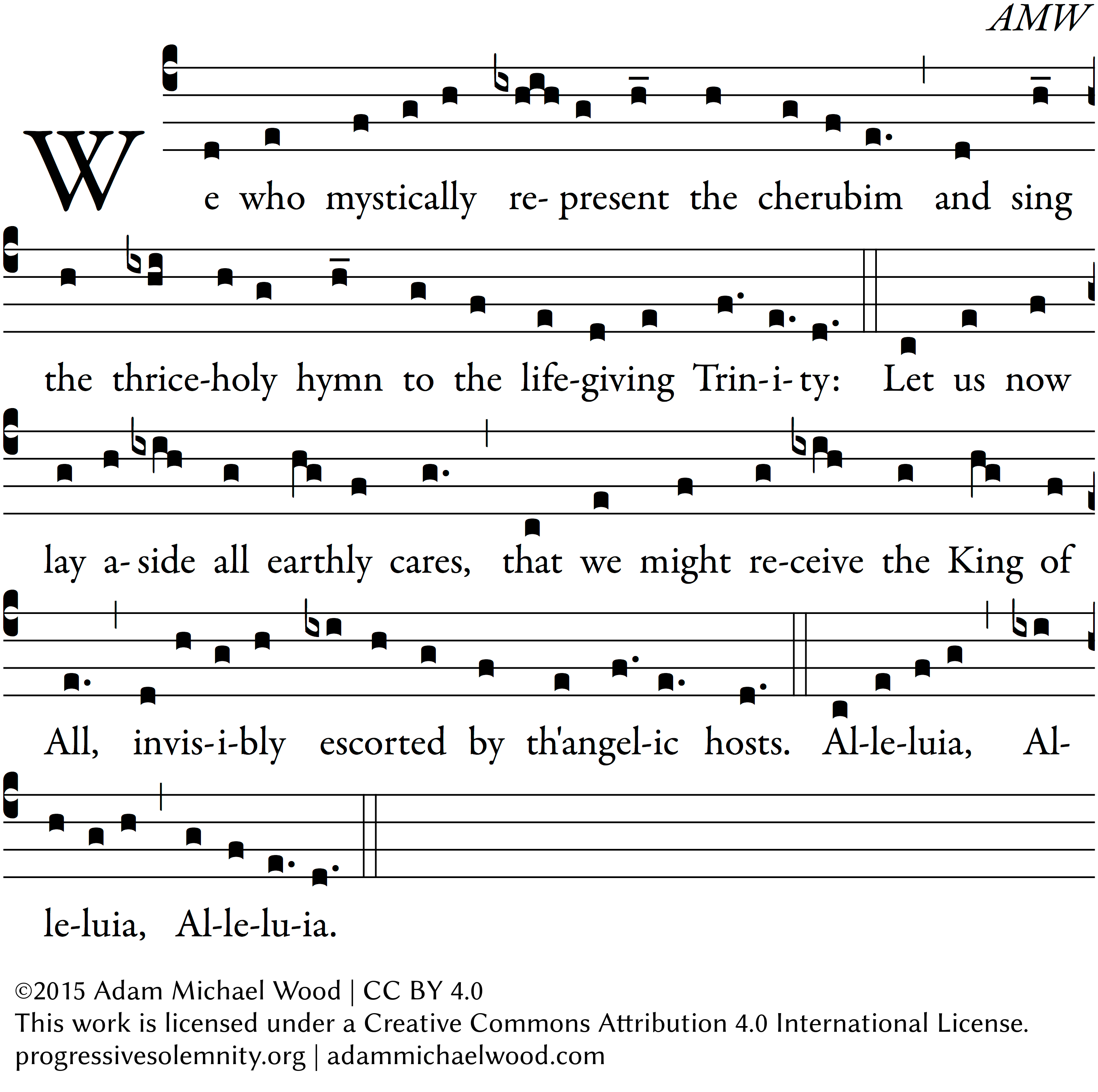 Traditional, from the Divine Liturgy of St. John Chrysostom