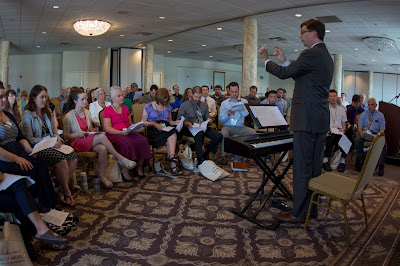 The Sacred Music Colloquium continued Thursday with rehearsals, breakout sessions, and an annual favorite, a sight-reading session for new compositions, led by the genial David Hughes. 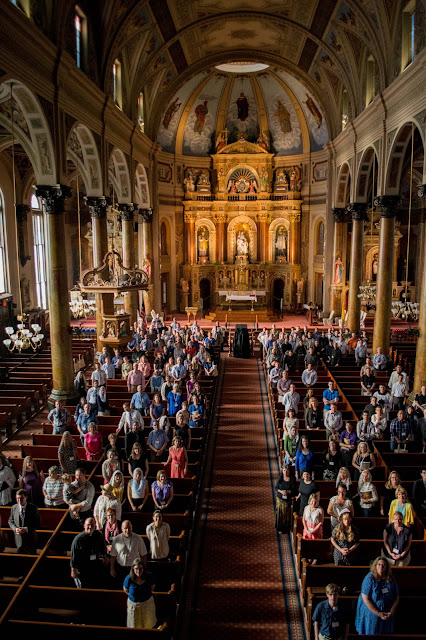 Participants returned to the Shrine of St. Joseph for the annual Requiem Mass offered for the repose of departed members of the CMAA. For many Colloquium participants, it was the first time they had an opportunity to experience this rite of the Church in its classic form, with the chants of the Mass for the Dead and traditional practices such as the singing of the sequence Dies irae and the use of a catafalque to represent the departed for whom the Mass is offered.  Here are the assembled participants after the Mass.

My bronchial infection worsened a bit Saturday, but I was bound and determined to sing the Victoria Requiem. I thank our most merciful Lord for His grace that fulfilled that desire. Allow me a small digression. One of  our celebrants this week was singing in Horst’s choir with us. I. had noticed a very beautiful cobalt/royal blue shoulder sling bag and casually remarked to him how enchanting it looked. He replied, “It’s yours.” Little did he know, but yesterday was my Geburtstag! I actually got a B-day present at Colloquium! And this wonderful priest was my confessor in addition to delivering one of the most stirring homilies I’ve ever heard on Visitation Day.

But this is about Horst Buchholz and his amazing charisms, his love for our Church, and his obvious devotion to reverencing our Lord through the achievement of sheer beauty.

I remember my first colloquium (I think 2007, at CUA/Shrine) when attendance was still around 100 or so folks. There were only two choirs- the everybody choir and a select chamber choir under Scott Turkington. Horst had us all. God bless them, the lovely ladies of the soprano section had trouble all week with various issues throughout various pieces. I think the Elgar “Ave Verum Corpus” was particular nettlesome for them. But through the week of rehearsals I observed Horst’s methodical but mirth-filled prodding of them to match this, blend that, and so forth. And by Sunday Mass the ladies sounded quite solid and sure. Horst Buchholz.

I’ve sung intermittently with him on a few motets over these years. But this is the first year that I wanted to be his chorister for the Victoria Requiem. His direction of the Vierne Mass in SLC 2012 was the choral highlight of that wonderful colloquium for me. And this year, a substantial number of very talented singers thought likewise about Horst and we had us quite a quire.

Despite his obvious impish jokes and mannerisms (from his huge Teutonic aura) he is one serious and demanding Kapellmeister! He knows exactly what he wants down to the turn of a phoneme to the arch of an entire Mass movement, and he doesn’t settle for the choir he hears in his mind, he molds the choir facing him into that ideal ensemble. Relentlessly. But never ruthlessly.

“The net result in this case was a masterful performance teased out of group of singers of various levels who’ve never sung as an ensemble prior to this week.” was my friend David Saunder’s very apt observation. And how appropriate is it that the joy of the architecture of beauty described in Father Pasley’s homily regarding the sure knowledge we have of the light from outside the jeweled windows of the pro-cathedral was also reflected on the faces of Horst’s choristers via the medium of a Requiem.

Thank you maestro Buchholz, all of the other faculty, the board and especially Janet, Mary Jane, Mary “Mezzo” and Kyle for a most rewarding week, and certainly one of the more exhilerating birthday gifts yesterday I’ve ever been gifted. (I remarked to the pro-cathedral’s young, brilliant Spanish organist/(DM?) that should I expire from joy before the Dies Irae, he was to assemble impromptu pall bearers and place my former self in the catafalque subito! With a smile like Horst’s on my face, no doubt.)