As many of you may remember, Adam Bartlett’s Simple English Propers was a product of this blog right here, the Chant Cafe, as Adam posted them weekly, received feedback, and people began using them. Then after they were published, Jeffrey Tucker posted weekly rehearsal videos for quite some time.

Now, organ accompaniment editions have been born out of another one of the CMAA’s sites, the MusicaSacra Forum.
Thanks to the tireless work of Ryan Dingess who has also been posting files of accompaniments weekly, the full year’s cycle is now complete. It is split into two editions: one containing Advent, Christmas, Lent, Holy Week, and Easter, and the second with Ordinary Time, Feasts & Solemnities, and Ritual Masses.
And just like Adam has done with his editions of SEP, Ryan has also released the editions to the world.
Purchase: Volume I | Volume II
Download: Volume I | Volume II
The revolution of sacred music marches on! 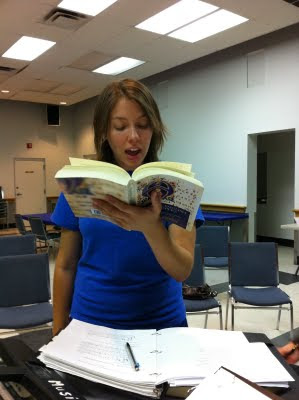 Although this may be a bit late for some, I received an inquiry this morning asking for Simple English Propers for the Solemnity of the Annunciation, which is celebrated today. We are now completing Feast and Solemnities as the last leg of this project and the complete draft will be done immanently, however the Annunciation portion is not ready to go yet.

I took a look at the Introit, Offertory and Communion that are sung for the Annunciation, though, and they are exactly the same as the Fourth Sunday of Advent. So if you still would like to sing the Annunciation propers today using SEP please feel free to download and use this score.

Please note that there is an error in the Easter Sunday edition of the Simple English Propers (Introit, Resurrexi) that was previously released. Verses from Psalm 138 were given instead of Psalm 139, the correct psalm for the Easter Day Introit.

This error has been corrected and the updated version of the score can be downloaded here. If you previously downloaded this score please update to the most recent version. My apologies for the mistake.

Download Simple English Propers for the feasts at the conclusion of the Easter Season: 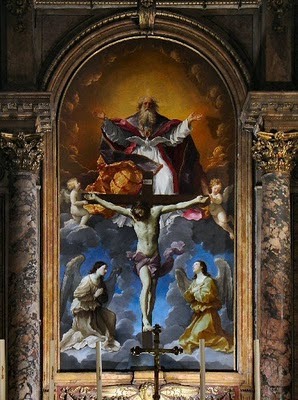 Pictured above: Painting of the Most Holy Trinity by Guido Reni, over the
main altar of Santissima Trinità dei Pellegrini in Rome. (H/T Fr. Z) Note that there are no propers in this collection for Good Friday. The reason for this, of course, is that there is no Introit, Offertory or Communion prescribed for this day. The SEP collection is only focusing on these three processional chants, which are typically the bulk of the proper for typical Sundays and Feasts, but as we know, Holy Week is its own beast.

One place where I broke the convention of the book was with the Offertory that is prescribed for Holy Thursday in the Graduale Romanum. This is the well known and very simple Ubi Caritas. The text and the musical setting for this chant are verbatim from the new English translation of the Roman Missal. The musical structure is identical to the Graduale Romanum and the text is newly translated as a part of the Roman Missal effort. I actually find it to be very nice!

So while the Simple English Propers book will be very useful for the week-to-week liturgical “grind”, when it comes to Holy Week additional resources will surely be needed.