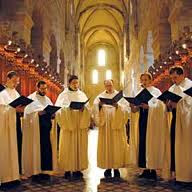 Anyone who has read anything about the Liturgical Movement in the twentieth century has come across the name of Pius Parsch. He was the pastor of a small parish in the Austrian countryside, and a chaplain to any number of youth groups in and around. His name is important to know, because many of the things which we now take for granted in our celebrations of the Ordinary Form of the Roman Rite began as experiments in or were popularized from this one place. Mass facing the people, offertory processions, vernacular mixed with Latin in the text of the Mass: all of these things were already “traditions” fixed in the minds of Parsch’s parishioners well before Vatican II.

But Pius Parsch was not a diocesan parish priest. He was an Augustinian canon, a member of a religious community in Klosterneuberg not from Vienna. As a canon, community daily Mass and the Divine Office were already part of his spirituality, and he sought to bring the riches of that liturgical experience he loved in the monastery to his parishioners. How he did that is a fascinating story in and of itself, and we cannot underestimate the influence Parsch had on the liturgical reform of Vatican II, and the influence he still has today, especially in Austria. But that is the subject for another article.

Klosterneuberg is not just any monastery. As one of the canons explained it to me, Klosterneuberg is to Austria what Westminster Abbey is to England. It is the spiritual heart of Austria, and its importance in the fascinating story of Austria has always been great.

The history of the Austrian Church has been very peculiar, especially on account of the widespread meddling in Church affairs by the “Sacristy Emperor”, Joseph II. What this means is that the way religious life is lived in Austria is different than the way it is lived in any other place in the world. What it means to be a Benedictine, a Trappist, or a Norbertine in Austria is markedly different than what it means in other parts of the world. The active life has been emphasized very much over the contemplative life, not by accident of history, but by imperial edict.

The Austrian Congregation of Canons Regular of St Augustine does not have a counterpart anywhere else in the world. The most venerable house is Klosterneuberg.

But what is Klosterneuberg like today? While vocations are drying up all over the German-speaking world, this abbey continues to receive novices, and many stay. The monastery has gained notoriety in part because of a daring project in which several American priests and seminarians entered the community with the hope of one day establishing a foundation in the US. Very soon three confreres will make that dream a reality thanks to the patronage of the Bishop of Rockville Center, New York. And so the deep roots of Austrian canonical life will find their way to America, which will benefit from the rich history and spirituality of a form of life which many Americans will fall in love with!

Klosterneuberg remains a house of serious religious observance, but within its own tradition. While from the outside it may seem very wealthy and free, its canons are expected to participate in the life of the house and in the numerous apostolates of the community. The entire Liturgy of the Hours is chanted daily, conventual Mass is for all, and the life of the monastery continues much as it always has. But it also is a house for adults, for men whose spirituality does not need to be propped up by the structures of religious life.

For me, Klosterneuberg represents the past of Austria: its glorious imperial history, its intricate and fascinating development throughout the Second Milennium, its famous characters whose stories need to be told outside of the monastery walls. It also represents the future of Austria, and quite possibly, of many other places as well. Ours is an age in which the clerical life desperately needs reform. Priests hunger after a life which gives them the spiritual support they need to do their ministry and save their own souls, but with the freedom and flexibility to respond to the needs of the Church of today. While many people in the Church are experimenting with various movements or novel hybrid forms of religious life, Klosterneuberg offers a very rooted serious tradition which has weathered the post-conciliar years substantially intact. Where other religious communities abandoned their charism and faltered, the Austrian canonical life was able to remain authentically Catholic and authentically religious without sacrificing its essence or its power. The fact that it is a community which is growing when so many others are not indicates something beautiful is going on for God there.

So where is the present of Austria then? Readers of Chant Café will hopefully recognize the name of the Cistercian Abbey of Heiligenkreuz. This abbey, also a venerable ancient monastic foundation of the Common Observance of the Cistercian Order, is the most flourishing and vibrant religious community in the German-speaking world. The abbey is known for its recent Chant CD. And, watch for a new CD, which has just been issued. entitled Vesperae. It is the reconstruction of Baroque Vespers with Cistercian chant and music from Abbey composer Alberich Mazak (1609-1661).

The Abbey is justly known for its chant. The community of eighty monks, of whom forty or so are resident in the house, sing all of the offices and Mass together. A peculiarity of the Abbey which makes its known in Englihs-speaking circles as a “Reform of the Reform” place is its liturgy. During the Second Vatican Council, an extraordinary man was the head of the community. Abbot Karl Braunstorfer was a peritus at the Second Vatican Council. When the Council urged the reform of the religious life and the Latin liturgical tradition, Abt Karl guided his community through the transition in a spirit of the hermeneutic of continuity. He and the abbey were often criticized bitterly for the way in which they went about this, most notably Franz Cardinal Koenig, the Cardinal of Vienna, who wondered aloud during a pastoral visit whether the Second Vatican Council had ever reached the Abbey. In retrospect, many can now see that the prayerful and resourceful abbot perhaps incarnated the true spirit of the Council more than he has been given credit for.

The Abbey is also home to the Higher School for Philosophy and Theology, and has become a much sought after place of study for orthodox Catholic theology in the German speaking world.

The Latin Ordinary Form is celebrated every day, and the Latin Cistercian Liturgia Horarum, with its two week Psalter Cycle, was produced from within the house. Large antiphonaries for the new liturgy have been produced. All of these new liturgical books have been produced with an eye to beauty, durability, and tradition. One can feel confident that St Bernard, were he to end up at Heiligenkreuz, would find himself very much at home.

The monks are known for their liturgy and their chant, and the abbey church is frequently full of visitors. I have never seen another large monastery church full for the daytime hours of the Office! I had the great grace to be invited to choir practice on Sunday morning. One assumes that monks famous for their CDs would not need choir practice, and it was comforting to see the Prior, who is also the Music Director for the Abbey, encouraging the monks to follow the proper rhythm for the chant and to not drag it or fall flat.

I cannot tell you the emotion I had to sit in the choir stalls and concelebrate Mass. But one thing will always stay with me, even greater than the perfect chant and the superb hospitality. As I came back from the altar after distributing Holy Communion, I saw many of the monks in their choir stalls in prayer. Scapulars and cucullae drawn over their heads, many were prostrate on the floor. Yet there was nothing showy or piously over-devotional about their prayer. The silent witness of those monks in adoration of the God whom they had just received spoke volumes about the proskynesis proper to the worship of the Almighty and Triune God. Music dissipated into a silence where heaven was opened, not by an aesthetic experience, but a moment of grace.

I was surprised to be greeted by a young monk at breakfast, “Oh, I have read your articles on Chant Café” even before I could stammer out a bad German Guten Morgen. So the blogosphere where Catholics come to share their love of liturgy and life has penetrated the walls of the most beautiful cloister of Central Europe. What the monks might not know, is that it is their witness which gives those us from without the cloister wall the courage to share with everyone our love of a common faith.

For more information, check out: