On the heels of Jeffrey’s colloquium testament, and Adam’s return from radio silence, I, too, wish to submit for your consideration some random and likely inarticulate thoughts about both realities and perceptions in the current liturgical culture, particularly those that seemingly circle the cyber-globe like the El Nino weather phenomenon.
Those of you who rightly call me out for my tendencies towards verbiage and hyperbole, caveat emptor and read no further! Maybe someone (Kathy?) will reduce this diatribe to a paragraph’s worth of bullet points, God willing.


First, I’m happy to have gone through a four decade learning curve in music ministry leadership that has led me from the noble naïveté of the Baltimore folk movement, the acid-trip eclecticism of unlimited-horizon visionaries in the Oakland Diocese, through the embryonic reformations of Deiss, Westendorf and Proulx zeniths, then the post-charismatic forging of amalgamations that represented, at the time, legitimately new and powerful voices in sung worship that spawned a complex genealogical dialectic, namely the SLJ/Dameans model, through to the Minnesotan monopoly, the Anglophile husbandry with St. Thomas More/Chris Willcocks, and other particular, regional expressions such as the Hurd/Cortez axis or the Hommerding/Chepponis sensibility.


Second, I wish I’d had the where-with-all to have simply sailed through these decades of both bliss and tumult in the deck shoes of Mahrt. Schuler or Salamunovich.


Those two celebratory musings aside, in my estimation there is one, sole maxim that applies for those wishing to improve the lot of worship, and here I’ll paraphrase the great pop hit by Annie Lennox and Aretha Franklin-“Sisters (and brothers) are doin’ it for themselves!”

All of us who, to whatever degree, are involved in Roman Catholic worship (from the ubiquitous PIP, so often misappropriated and maligned, to the aspiring Knight of St. Gregory) must understand that we are not the authors of change, that the progenitor of the vineyards of worship is the author, and we’re here as both vine tenders and branches of the vine at once. This creates in us a longing to be affirmed that as we go through the seasons and cycles of change, that we somehow ensure that all change is organic to its nature, and not manufactured. Well, as in real agriculture, and specifically the science and art that is wine-making, perfection and ideals are elusive and sometimes never achieved. And more often than not, one brilliant vintage is afforded a vintner and workers who messily and mightily worked the process, while across the road in another vineyard with equally endowed resources; the yield seems an unfathomable loss.


Where I’m going with this is that often we tend to lose sight of the noble purpose of our labor: the rightful thanks and praise to that Author of nature and Creation that has just a minute culmination, a glimpse or taste if you will, of His gifts offered to us in perfection.


Some of us get waylaid by flocking like disciples to experts and critics, who deftly and mannerly lay out the protocols of tasting the wine and appreciating their credits and debits, to which many of us respond with some sort of “Ah hah!” moment of enlightenment. We “taste and see” the goodness and want more than anything to have that experience re-created back home after our pilgrimage. But, every year, we go back home armed with new scores and literature (but not with the sommelier!) and are again confronted with the vagaries and grubbiness of having to actually convince others to up their levels of due diligence in trimming the vines, enriching the nutrients in the soil, planting new varietals, and hoping that Zephiro’s fortunes blow our way. 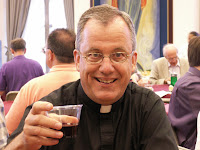 Puts the terror back into “terroire.” Nevertheless, we are compelled by conviction that we must enter the vineyard and the seasons with a renewed hope, bolstered confidences and new knowledge to lead our fellow workers to risk it all again that we may celebrate a better, more noble harvest and vintage. And all this must be done in community with other vintners, the folks across the road who make the similar effort, only with different varietals, different methods and different outcomes, perhaps. And none of us really can afford the time for indulging pride, envy, righteousness or condemnation within our own and our neighbors’ estates. Hopefully, when the wine flows from cask to bottle to goblet to tongue, all that’s left to say is “Te salud.”


It is fairly certain that people of every era remark at some particular moment, “We are living in extraordinary times.” Well, mark this as one of those moments from my vantage point. I remember my graduate advisor asserting his belief (not opinion) that the golden age of renaissance polyphony could only have been contemporaneous to that era’s masters; that logic simply dictates that Capella Sixtina under Pierluigi Palestrina’s direction would mark the zenith of performance practice of that unique musical form and expression. That notion bristled my sensibilities then and does still. That logic was in direct odds with my life’s experience and logic that as time and eras pass, all creation evolves in continuum. As a child I read the saga of Roger Bannister’s quest to break the four-minute mile in track history, an incomprehensible and impossible feat so regarded in the fifties. And then the litany of such conquerors, Sir Edmund Hillary, Jonas Salk, Frederick Douglass, Ludwig van Beethoven, and thousands of other legendary names became part of my understanding of the notion that we stand upon the shoulders of giants to this day. And eventually, as we re-construct history for our own purposes and among those names I happened to find Alfred Deller, John Eliott Gardiner, Peter Phillips, Roger Wagner, Paul Salamunovich, and others, the logic that “the golden age of renaissance polyphony” is now as much as then, and will continue into the future.


But how does that comment upon this era as particularly “extraordinary”? Well, in our liturgical domain, we are approaching a half-century’s worth of reflection upon the landscapes and vistas that apparently emerged from post-conciliar legislation of the Second Vatican Council and other subsequent documents. Looking from the perspective of musical evolutions associated with this era I would be more inclined to see the whole as more of a patchwork quilt, randomly assembled, than a tapestry whose design evidences intent and purpose, as well as artful craft. And just as a humorous aside, there have been a number of “long and winding roads” and sometimes “what a long, strange trip it’s been.” Think of the irony: “Sons of God” is a direct ancestor to the duly diligent gender inclusivity which is apparently a hallmark of Worship 4. Elsewhere, the prototype enculturation efforts of Clarence Rivers and Grayson Brown have been approbated by a number of non-African/American arrangers and composers to great popularity to this day while some of the most significant Catholic composition comes from the pen of Kevin Allen, who happens to be African-American, which embodies the discipline of renaissance counterpoint wed to contemporaneous choral techniques! And the lesson of the Beatles’ stunning contribution to both music and culture, namely that of sustaining a truly cutting edge and worthy aesthetic in a populist culture (and which has been imitated by other such collaborative RC liturgical cooperatives such as the SLJ’s and the Iona/John Bell commune, among others) is impossible. But yet, our liturgical counterparts have not faired well from their forays into chant, or traditional classicism, contrived Anglophile choral traditions and other “synthesis,” and when they return to emulate their own instinctive efforts of their earliest genres, those efforts generally seem, within the true discerning heart, tried, tired and tepid reminiscences of past glories. But they do sell at Scarborough Faires all over the nation, and thus persist. Banality, whether it’s orchestrated with brass, tympani and the organ, or timbales, bajo sextos, and accordians, much less pianos, guitars and electric basses, often is the only aspect many of us can concede is the sole, unifying hallmark of modern Roman Catholic liturgical composition.


I do maintain a charitable heart for a great deal of the genre commonly referred to as sacro-pop of late, even some obvious banalities, as long as those taking up these songs and settings bring both honest and humility-based aspects to the forefront of their use and performance. But sadly, our culture automatically works against this ethos as well. To this “critic” the ironic absurdity of hearing a mega-Aussie choir, orchestra, worship team and “authentic soul sister” soloist wringing out the last drop of “gospel authenticity” at a Papal Mass at a Sydney WYD Mass from James Moore’s much-discussed “Taste and See” is just as confounding as whenever I would watch the late Luciano Pavarotti wheeled out to sing the Franck “Panis Angelicus” at other mega-Masses.


Among many of us who frequent, contribute, learn and share “praxis and philosophy” in real time mindful of the cause taken up by CMAA and the Chant Café, it can be demonstrably shown that after this half-century reflection, the whatever-the-market-bears patchwork is unraveling at their quickly sewn seams. However, the Ernest and Julio Gallo, Boone’s Farm and Two-Buck Chuck novelties will always be among us.


But as has been said by others herein, the MS Forum and many of the line of ancestral periodicals from “Caecilia” to “The Adoremus Bulletins,” the surge of new, firmly rooted and tended vintages is culminating in the form of “The Simple English Propers,” the resources of Corpus Christi Watershed, the St. Louis Liturgical Institute efforts, the collections of Rice and Allen, and even in a great deal of the Psallite Hymnal Composers Group contributions.

But how this latter “counter-revolution” to the populist and commerce-driven status quo will eventuate and take root in the “normative” Sunday Mass in an increasingly tribalized/Balkanized parish terroire remains to be seen. And personally, I don’t subscribe to the notion of looking into either farmers’ almanacs or crystal balls in order to predict a noble success of this switch towards the ideal, the Mahrt mandate and paradigm, is a worthwhile use of our time. I believe we have to work the hours of each day through the seasons and the years consistently and with holy humility, no matter where on the arc of the trends happens to be either in our estate, or in the whole of the viticulture.