Other than some vernacular hymn translations (“Sing, My Tongue” on Holy Thursday), The Solemnity of the Most Holy Body and Blood of Christ is the anniversary of my introduction to Gregorian Chant.

When I was in High School, the Diocese of Orlando had a Gay and Lesbian Ministry, sort of a support-group/social-club that had grown out of the diocesan AIDS Ministry. The group had a monthly Mass together, which was held at my parish, and my brother planned the music for it until he left for college, at which point I took over. Of course, it was the 1990s, so I didn’t know anything about Propers or chant or traditional sacred music or anything. (Kids these days have it so easy.) The funny thing is, for what you might assume is a fairly progressive, 90s-typical ministry, most of the people who came to the CGLM Masses appreciated traditional music, and probably would have wanted to be singing Gregorian Ordinaries and Propers. (More than a few of them had been in a monastery or seminary earlier in their life). At any rate- we did pretty conventional 1990s LitPop as you’d probably imagine.

Then, one June (or May?), I was dutifully studying the Lectionary texts so that I could pick out four appropriate songs (you know how it is), and discovered that there was this optional Sequence for Corpus Christi. I knew what a Sequence was (we did some vernacular setting on Easter and Pentecost), but I didn’t know there was one for Corpus Christi. I had to ask around- where do you even find music for this? 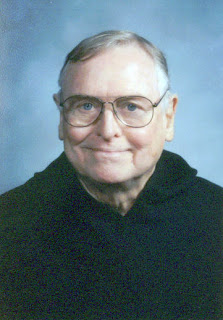 A wonderful old Servite priest (the Order staffed our parish at the time) named Fr. Damian informed me: you need a Graduale Romanum. I ordered one from GIA (okay- my mom ordered it). When it arrived, I went over to the rectory and Fr. Damian taught me how to read this weird four-line notation.

I sang the shortened version (from “Ecce Panis”) at the CGLM Mass. Sadly, our regularly-scheduled weekend Masses did not have the sequence, nor do I think they ever have in all the intervening years. I still have my Graduale Romanum, and it is just as mysterious and beautiful to me now as it was then.

I think about Fr. Damian, now asleep in Christ, every year when this feast rolls around. He was truly a holy man, perhaps one of the holiest I’ve ever met. I’m sure he would be thrilled to know that more and more people are learning that weird four-line notation than ever before.