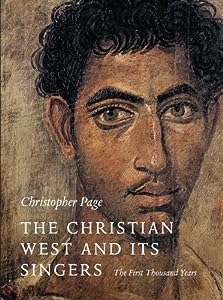 This book has been mentioned here before, and reviewed at least once already. But it is very much worth revisiting…

When Christopher Page’s book The Christian West and it’s Singers: The First Thousand Years came out, the print run was fairly small. I don’t spend a lot of money on things (even books, though they are my favorite thing) so by the time enough reviews were out that I knew I wanted to read it, the book was sold out, and used copies were being listed for over $400 on Amazon. Can you believe it? A book so valuable, full of so much insight and information, that more than a few people thought it was worth over $400 to have a copy on their own shelves- even in an age of mass communication, easy transport, and inter-library loans. I tell you- it’s that valuable.

But I didn’t have $400 (not to spend on a book, anyway), so I was thrilled late last year when a second edition was published, and new copies were again available. Considering what most of us have paid for textbooks at various times in our lives, $55 retail isn’t just reasonable- it’s freaking amazing.

This massive book (400 pages, almost 5 pounds) is one of the most amazing things I have ever read. It took me six months to get through (I got it as a Christmas present last year, and just finished it yesterday).

So many misconceptions, so many misunderstandings and mythologized versions of the decline of the Western Roman Empire, of the rise of the Church’s secular power, of the development and spread of Roman-style liturgy- so much of that was cleared up for me in reading this book. I’m now finding that in conversations, blog posts, and forum threads how pervasive and embedded many of these misconceptions are- ideas I either took for granted as true, or suspected were not quite right, but had no way of knowing.

One of those I’ll briefly mention – chosen because I think it is fairly non-controversial – is the way in which the Western Empire fell apart. This isn’t news to people who study these things, but to the vaguely-interested layman such as myself, the story you get from school-history is that after the seat moved to Constantinople, Rome was left to its own devices, was sacked by one or more barbarian tribes, and that was it- the dark ages had begun. Even if you know it was exactly like that, it’s hard to get an image of what happened. Because Page isn’t trying to explain in a few pargraphs “How the Roman Empire Fell,” but rather weaves the story throughout the historical development of the entire book, I finally saw how the Empire (like the Latin language itself) decayed and morphed into the Europe we see today. I had never considered how Roman governers and military leaders at remote outposts would have seen a slow, hardly noticeable decline in tax collection and tradeable goods, how these provincial rulers evolved from Roman puppets into Royal Dynasties, how the importation of Roman liturgy was used to continue a sense of Empire out in the badlands.

I also have to mention another aspect of this book which impressed me. Because of the time period and the subject matter, there is no way to deal with these issues in way that is neutral on the very question of religious, spiritual, and supernatural things. The only written history from the time period comes from people who believed in miracles and visions, in demons and angels. Even dealing with the less spectacular aspects of religion- sin and salvation, doctrine and authority – there’s really no such thing as “unbiased critical distance,” because critical distance is itself a position of bias- a bias toward modern conceptions of rationality, and against what secular scholars would consider unrealistic superstition.

I do not know Christopher Page’s religious affiliation or beliefs. But his book reads as if he is a serious believer, a scholar and devotee. He seems to take the Medievals at their word, offering no caveats or scholarly disclaimers to the accounts of visions and apparitions, of saintly miracles and healings. When an appropriate “alternative explanation” is relevant (such as an increase in miraculous healings coinciding with increased economic activity within a region) he offers them as if they are complimentary aspects of a unified phenomenon. He does not attempt to convince you that these things happened, or didn’t happen; he doesn’t belabor alternate theories in order to explain away someone else’s perception of spiritual reality. Whether Page believes in the mystical and supernatural or not (I suspect he does), he takes the beliefs of his subjects seriously, and also the beliefs of his readers.

To sum up (because I could go on and on), this book is a marvel. Truly, one of the most enjoyable, informative, and inspirational books I’ve ever read. You need to read it. Really- go buy it now.

7 Replies to “You Must Read This Book”