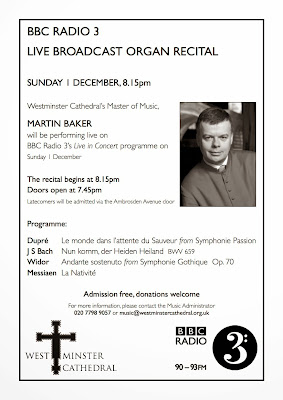 Live radio broadcasts of organ recitals are something of a rarity and this is one you should try not to miss. Martin Baker will be giving a recital at Westminster Cathedral tomorrow evening (Sunday) which will be broadcast live on BBC Radio 3. The programme begins with the opening movement of Dupré’s Passion Symphony, ‘The world awaiting the Saviour’. The symphony was first conceived as an improvisation on the mighty Wanamaker Organ in Philadelphia. Each of the four movements was based on a plainchant theme, this first movement being based on the Christmas hymn ‘Jesu redemptor omnium’. After an opening of relentless hammering chords and irregular rhythms, representing the world before Christ, the Gregorian melody emerges to instil calm, before the turbulent opening returns, threatening to engulf the plainchant. However, the hymn wins out, closing the work in a spectacular toccata with the melody triumphant in a prominent canon between manuals and pedals. Following the improvisation in Philadelphia, Dupré wrote the piece down and gave its first performance as a written composition at Westminster Cathedral in 1924. Martin Baker’s recital continues with J.S. Bach’s Nun komm, der Heiden Heiland, based on an Advent Chorale, and closes with Messiaen’s set of nine Christmas Meditations, La Nativité du Seigneur, written in 1935. Tune in if you can – I don’t know if BBC Radio 3 is available over the internet outside the UK, but the programme begins tomorrow evening, Sunday 1 December at 8.00pm GMT. If you are in London, you might like to hear it live at the Cathedral. Admission is free, see the poster for details.