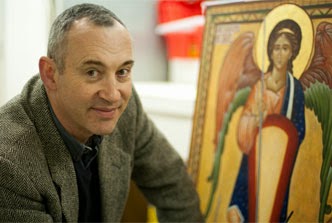 David Clayton, well regarded as a sacred artist and Artist-in-Residence and professor at Thomas More College in New Hampshire, has written an wonderful and detailed piece on his work in English chant psalmody at the Notre Dame Sacred Music blog.

Anyone who has sung Gregorian chant in addition to chant in English knows that the two are very different. The genius of the Gregorian tradition is its sensitive and masterful treatment of the Latin liturgical text, and it has done this so well that Pope St. Pius X named it the “supreme model for sacred music”—a sentiment that was reiterated at the Second Vatican Council and beyond.

The challenge of adapting this genius to vernacular languages is great, however, and some do not think that it can be done. I believe that it can, and so do the many who have seen some of the great successes of recent years in the area of English chant. There perhaps is still time for us to see which methods will be the most effective and long-lasting. Many of us have established our methods and convictions. The time has never been greater, though, to explore the possibilities in vernacular composition which making use of the Church’s great musical heritage as a point of inspiration and as a guide.

David Clayton has responded to the challenge in his own unique way. Here’s some of what he has to say about his task of composing psalm tones for use with English texts:

Adapting the Gregorian Psalms tones to English text is very difficult because the patterns of emphasis in the two languages are different: tones that flow naturally in Latin seem unnatural and awkward when forced onto English. I felt that in order to develop tones that could consistently be applied smoothly to all lines, I would do better to treat English as though it conformed more to its Germanic roots. This leads to a form of chant that tends much more towards having one note per syllable, which is called ‘syllabic’ chant. If you were to characterize one major difference between Latin and English, it would be that Latin floats on the vowels while English punches on the consonants. (When singing, choirs should be aware of this and make sure that they don’t punch so aggressively that they kill it!)

Those who delve deeply into what I have done will find that some tones have some simple neums of just two notes per syllable. However, even these cannot be universally applied without occasionally sounding awkward, so I had to develop a rule which allows the singers to decide whether to drop the second note depending on the flow of text at that point. The instruction on how and when to do that is in the score.

To begin adapting the melody, I analyzed the characteristics of the original tone that made it beautiful: is it melody or the rhythm, or aspects of both? In the end, I think it is the combination of the two, but I decided that I would focus first on melody and make my priority to retain the key melodic intervals. The rhythm of the tone does not emanate from the music first, but matches the rhythm of speech for each line of text. Therefore, I decided that the rhythmic pattern of the tone be dictated by the English language, which means that it will have a different rhythmic feel than its Latin root tone. Sometimes this method worked well, but other times the melodic phrasing is so closely linked to the rhythmic pattern of the original language that it does not carry over into English. In these cases it was necessary for the character of the tone to change partially. I found this particularly in the Mode VIII tones. In some cases I decided that I would have to go where the pattern of the English language was taking me and, in effect, compose new tones to fit it.

This process has to be more than a systematic process of adaptation. While what I have explained so far does sound somewhat coldly methodical, at the end of the process I always take a step back and ask myself if that particular tone “works”. When I hear it sung does this sound holy? Does it have goodness of form? Does it seem to participate in something that is universal to chant? From here, I modify the tone further based on these qualifications if needed.

You can read the rest there.

One Reply to “David Clayton on English Psalm Tones”