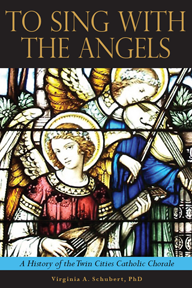 PRESS RELEASE
TO SING WITH THE ANGELS: A HISTORY OF THE TWIN CITIES CATHOLIC CHORALE
By Virginia A. Schubert, PhD
A signature volume chronicling the history of the Twin Cities Catholic Chorale, founded in 1955 by the then Father Richard J. Schuler.  The Chorale is now in its 42ndseason of singing with professional orchestra the great Classical and Romantic Masses of composers like Mozart, Joseph Haydn, Beethoven and Schubert as a part of the liturgy of the Holy Sacrifice of the Mass in Latin at the Church of Saint Agnes in Saint Paul, Minnesota.
This book also recounts the important role that Monsignor Schuler played in the area of sacred music in the post-Vatican II Church.  It was his heroic commitment, through word and deed, to the authentic implementation of Sacrosanctum Concilium. the document on music and liturgy of the Second Vatican Council, that helped keep the patrimony of Catholic sacred music alive in the United States for a new Renaissance.  When Monsignor Schuler was accused of living in the past, he often said that he was rather forty years ahead of the times.   And he is being proven correct.
THE BOOK WILL BE AVAILABLE BEGINNING DECEMBER 8, 2015
TO ORDER COPIES OF TO SING WITH THE ANGELS visit:
·         Leaflet Missal Co., 976 W. Minnehaha Ave., St.Paul, MN 55104 (651-487-2818 or 1-800-328-8582), www.leafletonline.com
·         www.saintceciliapublications.com
·         Amazon.com

For more information about the book, visit the New Liturgical Movement blog for the full press release.