Perhaps one of the most frequently heard questions regarding Sacred music is something to the effect:

“Is there a priority for what we are supposed to sing at Mass?”

This of course, presupposes an understanding of Sacred music as greater than singing hymns and a Mass setting. It also is more than simply providing music for the congregation to sing while the clergy say the black and do the red.

At a typical Sunday Mass, it is commonplace to expect the people to actively participate as follows: 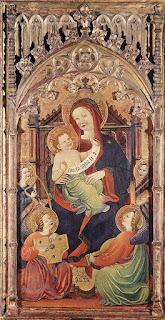 Wow!  That is quite a lot of music.  What do the clergy sing?  On occasion, perhaps the preface dialogue or blessing on larger feasts?

All of this is quite opposite from directives following Vatican II.  In 1967, the Sacred Congregation of Rites issued an Instruction of Sacred Music:  Musicam Sacram.  In it, there is a plan for achieving a sung Mass, which can be described in three degrees:

Now this is much more manageable!  The difficulty lies in the 1st degree: the Clergy.  Without the Clergy singing the orations and dialogues, music at Mass becomes secondary–a liturgical filler.  The presidential prayers to God as well as the call and response “the Lord be with you”, etc. are an essential element to the sung Mass, perhaps the most distinguishable one!

When neatly divided into Musicam Sacram’s three categories, or perhaps a fourth by separating the priest’s part from the deacon, each group is left with a manageable repertoire of roughly 4-5 musical offerings! 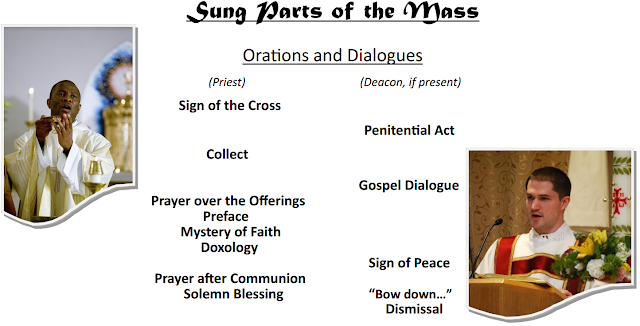 The same division of roles is true for the choir and people, making the sung parts more manageable.

*Hymns are the last option given (GIRM 48) and steps should be taken toward singing the proper texts.

7 Replies to “What is Sung and When?”