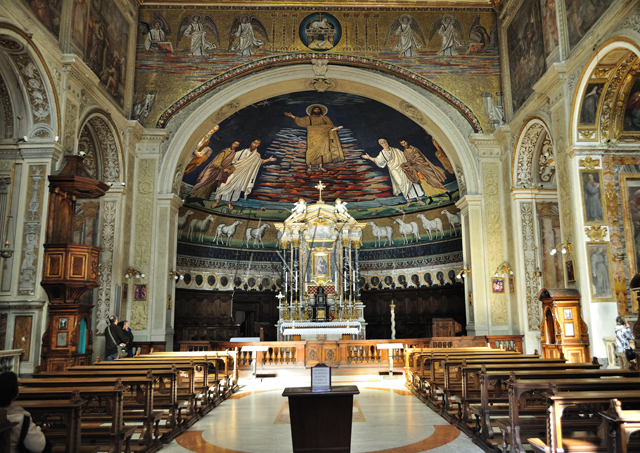 The Franciscan basilica Cosmas and Damian, in the Roman Forum, is a unique renovation. Because of the dampness of the surrounding area in the old heart of Rome, the basilica’s remarkable mosaics began to lose tiles, and entire figures. So in the 17th century it was rebuilt by papal works, and its floor was raised an almost impossible 7 meters. Its old floor was now the floor of its crypt, and the new floor was above the waterline, saving the priceless and ancient works of art along the interior walls.

What is striking about this renovation is the wonderful sense of beauty and proportion in the new space. Somehow the raising of the floor was done so thoughtfully and expertly that there is no sense of walking into a space that has been fixed and redone–with the exception of the replaced mosaics in the corners of the apse, which are visibly drawn by a new hand. As far as the architecture goes, the space works as a complete and harmonious whole.

It seems to me that the basilica suggests a lesson about all reforms in the Church. Reform is not bad in itself, and the Church must always be discerning its way forward, with “continuity and discontinuity at different levels,” in the happy phrase of the Pope Emeritus.

More of our reforms should be this seamless, this beautiful, this attentive to both the past and the present, preserving a sense of harmony and proportion. Reform is not destruction. It attends to the ethos of a thing. Reform in the Church respects the authentic expressions of the Church’s marks wherever they may be found.

One Reply to “Sts. Cosmas and Damian–and Ecclesiastical Reform”