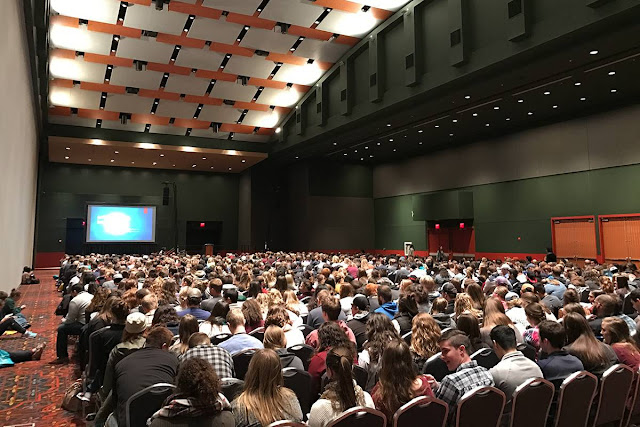 The Catholic news of the week was the biennial Seek conference of Focus, the highly successful college missionary program, held in San Antonio, which drew over 13,000 young people from all over the country.

Besides organized talks, adoration, confession, concerts, fun times, and Masses, there were well-attended Liturgy of the Hours services held in the hallways of the conference hotel.

On Twitter, I posted that after hearing two hours of the most intense confessions of my life, I felt exhausted, but also more alive than I had ever felt before. As a priest, I’ll say that we can often tell when a conversation or encounter is particularly important, but it has never before been so clear to me — confession after confession, conversation after conversation — that the Lord was actively changing the lives of the students I was speaking to, powerfully and in real time. Clear moments of conversion were showing themselves, over and over, penitent after penitent, in the confessional. – See more at: http://aleteia.org/2017/01/08/hearts-afire-catholic-college-students-encounter-christ-at-seek2017/?ru=b28e9f2a3c45a72602c255e91b1df657#sthash.5yP8QIeQ.dpuf

A successful program always has small (and sometimes wonderful) glitches.

“Ladies and gentlemen, please refrain from getting in line for confession because the long line is now a fire hazard” #SEEK2017 #goals

2 Replies to “Focus on the Future”