Popayán is one of Colombia’s oldest Colonial cities founded in 1537 by Sebastián Belalcazár and is located on the way between Bogotá (a one hour flight to the East) and Quito (about 20 hours by road to the Southwest). An important religious and cultural city (the university was founded in 1827) Popayán is today a curious mixture of Indito, Mestizo, and Hispanic culture and lifeways.

Monday of Holy Week featured the Misa del Cargueros. The cargueros are the men who carry the large palios or platforms with the life size statues and scenarios during the nighttime processions. It takes eight strong men to carry each platform that is about six feet by eight feet in size, many with three or four life-size statues. The Mass was prayed in honor for those who had died since last year and to honor those with up to fifty years of service.

At noon in the rebuilt 18th-century style church of San José with an audience of more than 150 the choir with the funny name “Las Gatos — Coro” (“Cats Choir“) presented a stunning concert of sacred motets from the 16th and early 17th centuries. Director Félix Córdoba Galvis showed a clear understanding of Renaissance motet style conducting the mixed choir of thirteen singers in an aesthetically pleasing presentation. Professor Córdoba from Cali, has a very relaxed conducting style but with an obvious control over the choir exhibiting carefully measured dynamics and tempi.

Of the fourteen motets (complete list follows at end) all would be suitable for use at a Mass. Most were “old war-horses” such as Lasso’s Super flumina Babylonis and Palestrina’s O bone Jesu and Sicut cervus, and most were for four part voices, though two were @5 with an SSATB chorus. Others such as Victoria’s Vere languores and O lux et decus Hispanie are less well known. Purists (or priests) might object to the Palestrina Haec Dies at the Gradual of the Mass for Easter but it is a wonderful composition.

The blend of the group was excellent for the most part, though frequently one soprano voice “stuck out” due to her vocal quality. Contrasts between homorhythmic sections and the contrapuntal points of imitation represented the style nicely and the choir managed the modal harmonies with little trouble.

Presented chronologically, the motets well represented the sacred music of the Renaissance from Lasso to Victoria. With the exception of the Franco-Flemish Rolando de Lassus (as Orlando di Lasso he wrote in the Italian style) and Francisco Guerrero and Tomas Luis de Victoria, the composers were all Italian though the latter represent the best of Spanish Renaissance music.

The program concluded with two secular villancicos by Manuel Machado and two madrigals by Claudio Monteverdi. One must carefully check the texts of villancicos to determine if they are secular or religious in nature. Some villancico texts may seem on the surface to be secular but they may well have been used for para-liturgical celebrations. More about that tomorrow, as we will hear more villancicos then. Some villancicos were also used in Colonial times to replace Responses at Matins for particular feasts. These two, however, are definitely secular compositions.

Machado was born and trained in Lisbon but moved to Madrid where his father was harpist at the Royal Chapel. In 1639 he became a musician at the palace of Felipe IV for the rest of his life. Although he wrote several sacred compositions, he is best known for his secular cantigas (@3 or 4) and villancicos.

Monteverdi’s two madrigals appeared to come as a shock to the audience with his harsh dissonances contrasting with the smooth, readily resolved dissonances of the rest of the program. However, to a musician who loves Monteverdi they were a pleasant ending to an excellent concert.

The evening concert was strictly secular music for a group of ten violas and an actress (with a pedagogical aspect suitable better for elementary school children). However, tomorrow promises to be another day of excellent religious, if not sacred, music. 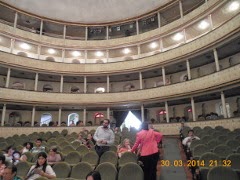 (The Chant Café welcomes J. Richard Haefer, professor emeritus of music, Arizona State University, for a series of articles. This week, Dr. Haefer is writing to us from Popayán, Colombia, where he is observing Holy Week and attending the 52nd year of the Festival de Música Religiosa.

Here he gives us some background on the event.)

For centuries Holy Mother Church has used and encouraged drama as a means of catechizing the people. Witness the recitation of the Rosary and the Via Crucis known to nearly all Catholics, though today rarely presented in dramatic fashion. Less well known are the mystery or miracle plays prevalent in the late Middle Ages and Renaissance, and still practiced in many out-reaches of Catholic missionary territory. Musicians would know the “Play of Daniel” with its monophonic melodies, and Catholics in the Southwest of the United States may have participated in Los Pastorelas or Las Posadas (the latter encouraged by the Knights of Columbus throughout the U.S., though with little musical information). Also known in the Southwest and in northern Mexico are the Lenten festivities of the Yaqui and Mayo (not Maya) Indians where members of the cults of Phariseos and Chapayacas make promises or vows such as not speaking during the 40 days of Lent, as an offering of penance to Our Lord.

All of the dramas mentioned above and more owe their origin in the New World to the Hispanic missionaries of the 15th – 19th centuries. Such is Semana Santa in Popayán. The Holy Week processions and celebrations in Spanish cities such as Seville, Salamanca and Murcia are well known, featuring large floats of statues organized by fraternities portraying Passion Week in the life of Christ and offered as a penance each year. The priests who accompanied the Conquistadors and later colonizers brought this tradition to the New World which continue in many locations in one form or another. The town of Popayán in southwestern Colombia has presented the tradition of religious processions for more than 450 years. As the most developed of Holy Week activities in Colombia, the festivities were added to the UNESCO list of Intangible World Heritage in 2009.

celebrations in Popayán, now one of the longest continual festivals of religious music. In the next few days I will review some of the musical activities of that festival for the readers of The Chant Café.

Perhaps this is an opportunity for us to reflect on the difference between “sacred” music and “religious” music. Holy Mother Church has given us not only distinct criteria to define such music, but also several centuries of examples in the treasury of Catholic sacred music, which unfortunately have been forgotten by most. There exist, however, many examples of religious music appropriate for concerts during Holy Week, which although not “sacred” might direct our thoughts and hearts to the Passion of Our Lord: for example, the music of Bach comes to mind. We will see in the next few days what Popayán has to offer.

One final thought for today refers to the music of the processions. Though not part of the music festival per se, it might be that the alabados and alabanzas sung during the processions may prove to be the most “sacred” music of the overall festivities.  The procession of last night, Viernes de Dolores (Friday of Sorrows), had only secular music, as two local bands led and concluded the procession that featured ten beautiful “pasos” with life-size statues, each carried on the shoulders of eight young men.     The religious significance of each Holy Week procession, the statues, and other elements, such as the flowers featured on each paso, indicate that more than 450 years of visual catechism has successfully developed a Catholic culture within this part of Hispanic America.