Among musicians I love Mozart, of course. The ‘Et incarnatus est’ from his Mass in C minor is matchless; it lifts you to God! I love Mozart performed by Clara Haskil. Mozart fulfills me. But I cannot think about his music; I have to listen to it. I like listening to Beethoven, but in a Promethean way, and the most Promethean interpreter for me is Furtwängler. And then Bach’s Passions. The piece by Bach that I love so much is the ‘Erbarme Dich,’ the tears of Peter in the ‘St. Matthew Passion.’ Sublime. Then, at a different level, not intimate in the same way, I love Wagner. I like to listen to him, but not all the time. The performance of Wagner’s ‘Ring’ by Furtwängler at La Scala in Milan in 1950 is for me the best. But also the ‘Parsifal’ by Knappertsbusch in 1962.

“We should also talk about the cinema. ‘La Strada,’ by Fellini, is the movie that perhaps I loved the most. I identify with this movie, in which there is an implicit reference to St. Francis. I also believe that I watched all of the Italian movies with Anna Magnani and Aldo Fabrizi when I was between 10 and 12 years old. Another film that I loved is ‘Rome, Open City.’ I owe my film culture especially to my parents who used to take us to the movies quite often.

“Anyway, in general I love tragic artists, especially classical ones. There is a nice definition that Cervantes puts on the lips of the bachelor Carrasco to praise the story of Don Quixote: ‘Children have it in their hands, young people read it, adults understand it, the elderly praise it.’ For me this can be a good definition of the classics.”

Start at 7:15 for the Et incarnatus est.

I spent some time going through a few old interviews of Cardinal Ratzinger this morning, and pretending to make up headlines.

“Pope Defends Prostitution, Calls for Legalization” — this is true. He made the comments in Salt of the Earth, citing St. Augustine.

“Pope Says there are ‘No Final Answers'” — speaking about the attainment of truth in this life.

“Sex ‘Not Sinful'” Says Pope” — same interview, regarding whether sexuality results from the fall.

It’s best to not get wrapped up in the hysteria. More thoughts at NLM. 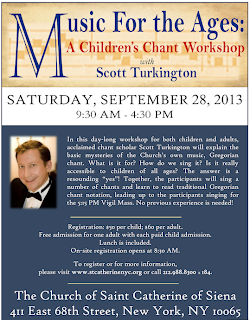 It happened again yesterday. I was attending one of those hip, contemporary churches — and almost no one sang. Worshippers stood obediently as the band rocked out, the smoke machine belched and lights flashed. Lyrics were projected on the screen, but almost no one sang them. A few women were trying, but I saw only one male (other than the worship leader) making the attempt.

In this interview with Our Sunday Visitor, I gave props to Giovanni Battista Pergolesi (1710-36). “It is in many movements and probably not viable as a liturgical piece. But as pure musical expression, it is a revelation.”

What is your favorite?

An applied physics professor and pillar of my former choir at St. Brigid Church in Lexington, Massachusetts, tipped me off to this New Republic article by Philip Kennicott, Art and Architecture critic of the Washington Post. Kennicott sees a parallel between the decline in American orchestras and the experience of post-Vatican II liturgy:

“For decades, the musical world has been going through its own protracted and painful Vatican II, initially driven by the assumption that the only thing that really ails the form is a superficial matter of liturgy and presentation. Conductors should turn away from the altar and face the congregants, speak in the vernacular, and forego white-tie-and-tails vestments. The service should be consumer-friendly.”

Though failing to offer a solution to the nation-wide orchestra dilemma, Kennicott makes a compelling case that attempts to broaden the market base by disregarding artistic standards has failed. “One can understand how and why adults concoct this sort of thing, why a market has developed for political poster music that offers only a generic sense of sadness at mankind’s sufferings. But why make young people play it? It seems a very ill sign for the future that bad music is so willingly foisted on serious junior musicians who have already made a commitment to the art form.”

I see the result of this “generic” thinking in recent ads for music directors within my own archdiocese. Newly formed collaborative parishes are requiring that applicants must be able to provide music in a “variety of genres.” That’s code meaning the applicant must not have strongly held artistic convictions. Or another way to put it, the aspiring musician must be able to program music with which he or she is uncomfortable. However you define it, it is a recipe for failure.