Skip to content
In one of the main theaters at the historic Mt. Vernon Estate they show a video about Washington’s key Revolutionary War victory at the Battle of Trenton. It’s never boring, though I’ve seen it a hundred times, and until today I’d attributed this to the special effects. There are big soap-bubble snowflakes that fall from the ceiling during the Crossing of the Delaware, for example, and the cannon fire makes the seats shake like a 32″ contra bombarde in a clapboard church. But they’ve just installed a caption screen for the hard of hearing, and as I read the narration for the first time, I realized why the movie was never boring: the verbs. Screen after screen passed without a single form of the verb “to be.” Instead, there were real verbs: marched, refused, surprised, attacked. There were only a few “was”es and “were”s to slow down the action.
A similarly vigorous use of verbs characterizes many of our greatest English language hymns, like those of Charles Wesley and Isaac Watts, and of other great hymn writers. In the five common-use verses of Watts’ Jesus Shall Reign, for example, there is one use of “be,” and in all eight verses of Watt’s original hymn, there are only two. In two popular versifications of the Te Deum, Clarence Walworth’s translation of Grosser Gott and Christopher Idle’s God We Praise You, action verbs predominate and the use of “be” is very limited.
Limiting verbs that merely function, that merely link together nouns  with other nouns or adjectives, and instead choosing true action verbs, greatly increases verbal density. This is hugely important in poetic forms such as hymns, which are meant to be dense speech. The tongue delights to trip through the rich forest of verbs in Jesus Shall Reign: reign, run, stretch, wax, wane–and that is just the first verse.
There are exceptions, of course. In Wesley’s epic hymn Wrestling Jacob (which Watts said was worth all the verses he himself had written) the verb “to be” is prevalent, and yet highly meaningful, because Jacob’s own question “What is your name?” makes the verb “to be” into a real verb. It is God’s own Is-ness that Jacob seeks. The same can be said of all four uses of forms of “be” in Holy, Holy, Holy: they refer to God’s I Am-ness, God as Being. They are not linking verbs but real verbs.
During the post-conciliar period there have always been oases of chant, including some of the contemplative monasteries throughout the world. One of them happens to be in the parish I serve, in Alexandria, Virginia. The Poor Clare nuns daily chant a novus ordo Mass, usually with Latin propers, almost always with a chanted Gregorian ordinary. It’s a special blessing to have the nuns with us, and not only for the music but because of their life of unceasing prayer.
For normal spiritual reading, I usually take up the work of a saint or some serious theology. But when I’m on retreat, having just a few days to become reinvigorated, I reach for C.S. Lewis. Perelandra is my favorite (Lewis said it was worth 20 Screwtapes) but there are others that I find just as helpful, including The Great Divorce and The Lion, the Witch, and the Wardrobe.

More than any other author, Lewis fuels my Christian imagination.

The rational arguments of the doctors and apologists are wonderful. They can bolster faith and do away with doubts. But, for me at least, they cannot reframe my world, and, in my opinion, reframing the world for believers must be goal of the new evangelization. And it will not be a hard sell. One senses a world-weariness, an information overload. People are looking for meaning, something more, something new–and Catholicism has this to offer.

The Second Vatican Council teaches that music is the most important liturgical art because it is wedded to the words of the liturgy. This is true, and words do become more alive, more urgent and delightful, when set to music. And yet it is also true that music is one of the liturgical arts that can penetrate the imagination to the point of restoring hope to a weary world. Music stirs the emotions, potentially making believers more committed and courageous. It aids that most precious gift of recollected silence. It can provide a sense of unity and coherence with past ages and with all the other believers in the universal Church. It is this kind of coherence that people long for in our age, and try to find in the most inadequate places. The Church has in itself truth and unity and concord, and music can help express this and make it attractive.

The logic of the Cross is much more plain than the logic of the Resurrection. The logic of the Cross is repeated throughout the synoptic Gospels and throughout the letters of St. Paul: if we want to follow Him, we must carry the Cross as He did. If we die with Him, we shall also live with Him. We have been baptized into His death.
The logic of the Resurrection is quite the reverse, as we read in the stunning theological high-water mark of St. Paul’s First Letter to the Corinthians. In Chapter 15, St. Paul expounds the necessary connection between Jesus’ resurrection and our own. “If the dead are not raised, then Christ is not raised.” There is such a cause-and-effect link between Jesus’ resurrection and our own that if our resurrection is not possible, then Jesus’ resurrection is not true. “And if Christ has not been raised, your faith is futile; you are still in your sins. Then those also who have fallen asleep in Christ are lost. If only for this life we have hope in Christ, we are of all people most to be pitied.”
St. Paul makes an argument ad absurdum, demonstrating that our resurrection is really possible. Otherwise, Christ’s never happened–and that is absurd, because it did happen. “But Christ has indeed been raised from the dead, the firstfruits of those who have fallen asleep. For since death came through a man, the resurrection of the dead comes also through a man.”
This passage of 1 Corinthians is the inspiration of one of the many cheerful hymns of the season, sung here in Charles Wood’s arrangement, This Joyful Eastertide: Had Christ, that once was slain, ne’er burst his three-day prison, our faith had been in vain;but now hath Christ arisen, arisen, arisen, arisen.

A lovely article on the NLM. 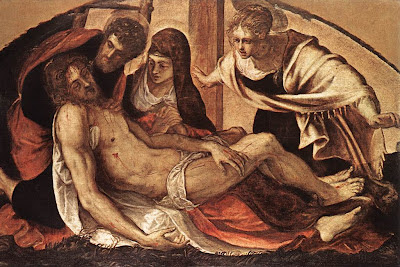 Preserve me, God, I take refuge in you.
I say to the Lord: “You are my God.
My happiness lies in you alone.”

He has put into my heart a marvelous love
for the faithful ones who dwell in his land.

Those who choose other gods increase their sorrows.
Never will I offer their offerings of blood.
Never will I take their name upon my lips.

O Lord, it is you who are my portion and cup;
it is you yourself who are my prize.
The lot marked out for me is my delight:
welcome indeed the heritage that falls to me!

I will bless the Lord who gives me counsel,
who even at night directs my heart.
I keep the Lord ever in my sight:
since he is at my right hand, I shall stand firm.

And so my heart rejoices, my soul is glad;
even my body shall rest in safety.
For you will not leave my soul among the dead,
nor let your beloved know decay.

You will show me the path of life,
the fullness of joy in your presence,
at your right hand happiness for ever.