The class gathered for William Mahrt’s lectures on Psalmody Fr. Pasley in his biretta following the English Mass 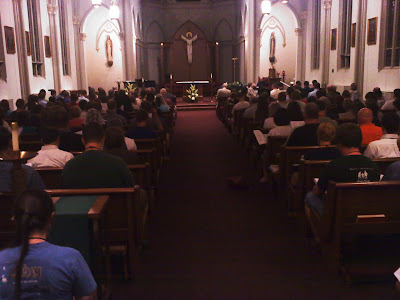 I often find myself even more inspired by amateur performances than professional ones, but this recording is very special indeed. It is a group started by a seminarian in a tiny parish in Mississippi. They have only been together for one month. This is the third piece that they have sung at Mass. Their singing has brought new inspiration and life to the parish, with accolades pouring in. At first the pastor was reluctant but, seeing the effects, he is now fully on board with the program. It begins differently in every parish. This is one direction one can take. In most parishes today, there is no choral program at all, so this kind of effort amounts to flowers blooming in a desert. Absolutely thrilling. Have a listen.

One of the new faculty for the Sacred Music Colloquium for 2010 (it begins tonight!) is Fr. Mark Daniel Kirby of the Vultus Christi blog, and author of the wonderful article in Sacred Music, publish one year ago, on liturgical theology. We met up with him last night and enjoyed talking for several hours about nothing and everything. This image is from my iPhone.

These are wonderful sounds files recorded at the final Mass of the Chant Intensive, sung at Church of the Epiphany, Pittsburgh, Pennsylvania.

In recent days, I find myself constantly talking about The Christian West and Its Singers: The First Thousand Years. There can be no question that his account is seminal and, of course, deeply interesting to anyone who sings at liturgy or has an interest in Gregorian chant. I’m thrilled by the intense focus on the subject that I care about most deeply, so the book is a joy from the first to the last. It begins in the Apostolic period and goes all the way to Guido d’Arezzo. The production values are fantastic (thank you Yale University). My only complaint is that the book is so heavy that I could not bring it with my on travels so all I can do at the moment is look forward to getting back to my reading. I aspire, actually, to live blog the book in the Chant Cafe, chapter by chapter. Live blogging a book can be rigorous and draining but it is a wonderful way to learn. This book is certainly worth such a detailed treatment. Perhaps it will happen. In any case, you should get your own copies so we can discuss it in the comments box as we go along. The price is certainly right. I say again to Professor Page: your book is a marvel and you deserve profound congratulations on this monumental work.