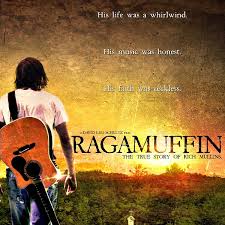 No doubt one of the benefits of media streaming proves to be the cornucopia of films warehoused in various vendors such as Netflix and Amazon. I’ve found a number of unheralded movies that I regard as top drawer efforts. Surprisingly we took a chance on a Christian-themed film based upon the life story of Rich Mullins, titled “Ragamuffin.” If you’ve said “That name rings a bell,” then you’re right. Mullins was the songwriter responsible for the contemporary Christian megahit “Awesome God.” This song, among others of his, has achieved anthem status over the last two decades. I never reckoned with it until a couple of years ago. I still found it wanting versus many of Mullins’ other tunes. One thing about such pop-style icon songs (think evangelical “On Eagles’ Wings) is that it is difficult to explain rationally why they achieve such status and regard. One of my parochial students, who went onto HS and major university studies in choral music, still swears that “Awesome God” is the most apt expression of Christian faith he’s ever experienced.  De gustibus and all that.
Back to “Ragamuffin.” It’s not a clever wordplay on Ravi Shankar’s East Indian legacy wed to the muffin craze. The title stems from an itinerant fallen Catholic priest’s reworking of systematic theology down to the most basic elements. And there are at least two dynamics from the film account of Mullins’ life that should be of interest to the differing factions of the worship wars, or at least the détente of same.

This uncharacteristic portrayal, according to standard “Christian Film” methodology, unflinchingly examines the psychological and emotional turmoil that was Rich Mullins’ cross to wrenchingly bear as a Christian person and son, deprived of all talent and paternal love save that of the innate musician. The tortured artist motif is long in the tooth for filmdom, but displaying that for a Christian mainstream audience is almost unheard of. Mullins’ unabashed belief in God, Christ and the church is constantly self-assaulted by the un-remediated failure of his father’s ability to nurture the lost son’s neurosis and bring him to the family fold. Of course this affects the adolescent and adult Mullins’ sensibilities as he wrestles with his relationship with daddy God, Abba. In a word, the gifted songwriter is a total wreck personally and simultaneously as his fame and artistic success blossoms.

The two lessons apparent to me, and sort of at odds with each other in our catholic ritual and liturgical sphere, are: that a cultic personality tends not to bind either community or fit worship of same in perpetuity; and that some folks who not only cling to rigorist notions of fit worship, but insist at all turns that orthodoxy and orthopraxis are not only demanded by the Church, but by God Himself, can achieve the same failure to evangelize “ragamuffin” Christians by their self-imposed stasis as purveyors of fine Christianity that can’t pass the smell test of Matthew 25.
Thankfully, our liturgical philosophy as Roman Catholics always efforts to shepherd us towards the East, towards the Crucifix and Tabernacle, sacrifice and feast of victory. There are numerous scenes in the film that depict Mullins as the seeker poet at the piano, extemporaneously sharing his revelations about life the universe and everything with pew people who likely came to their churches only to hear some really good Christian tunes. Again and again, as Mullins endures the curve of life’s peaks and valleys so as to reach new epiphanies, he’s shown sharing his personal theology in extremis with “ragamuffin” Christians who just show up, and it seems almost an incoherent assault upon the mannerism of conventional “church.” The safest environment for Mullins (and by implication all Contemporary Christian Artists of that early genre, Amy Grant, Michael W. Smith, Phil Keaggy and others) is the arena concert, not the sanctuary. “You can take the Christian boy out of the church, but you can’t take the church out of the Christian boy.” It seems untenable. And it is. Those who would assert their personal convictions unabated and uninformed upon congregant assemblies intent upon corporate worship do the church no favor.

On the other hand, when those who take the responsibilities of liturgical office arrive at some belief that the vagaries of propriety and canon mitigates and dismisses all other concerns that are part and parcel of ritual and worship by HUMAN BEINGS, then they risk not recognizing Christ at their own doors. They put on blinders to the reality that those whom they serve are not likely all at the same locus of faith. And “ragamuffin” theology demands that these folk not be discounted much less indemnified. In historical terms I suppose these people might be the anawim, the untouchables or the great unwashed plebes who don’t know a Proper from an Ordinary. They don’t necessarily need the gift of finest wheat before they need a hand up. If a rationale is at play that we’re providing an experience mirroring Christ’s mission statement “I came that you might have life in abundance” but skip all of the care and nurture by force-feeding them our personal pearls rather than a sustenance they won’t spit up at first blush, we’re not doing our office optimally, if not well at all.

All of these thoughts are not at all intended to denigrate any and all efforts to reform and improve the state of our liturgical practices. The film, which also concludes with the vinegar of Mullins’ untimely, inopportune death and the ambrosia of a heavenly reconciliation with his father, does illumine the need for us to be servants ultimately not of ourselves and our expectations, but of the Church Christ founded and trusted His disciples to guide. That remains a supremely human endeavor reaching for salvation here and in heaven. We may comingle and commune with the ephemeral Divine Mysteries, but until resurrection we often cannot bury the failings of our fallen nature. And when from death I’m free, I’ll sing on, I’ll sing on.