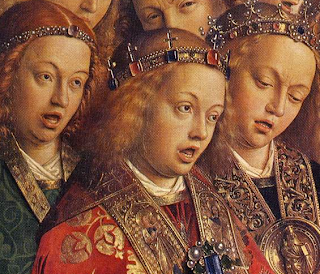 Everything seems like a top priority for Catholic music these days. We need changes in what we sing, how we think about the role of music, the way music is financed, and where we get it.

But aside from all of these, there is the extremely serious matter of how we go about singing at all. This might be the most important challenge we face. Without getting this right, plainchant and therefore truly liturgical music, will forever be on the shelf and we will forever continue with our current habit of picking random songs to sing to replace Mass texts and judging their suitability by gauging their seeming popularity.

The short summary is that we need to start believing that liturgical music is produced by the human voice alone, and we need to embrace liturgical prose rather than someone else’s poetry as the core substance of what we sing. We are about as far apart from this ideal as we’ve ever been, and a major part of the reason is that we no longer believe in our ability to sing anything at all. Forget style and text for a moment and just think about singing in general.

Here is an example of what I mean. I was just on the flight and I was sitting at the back fo the plane where the flight attendant makes those long announcements about how to bail out of the plane, use your floatation device, not to smoke in the lavatory, and the like. It is a memorized piece of prose.

After she finished, I said to her, jokingly: “you know, that would be much more noble if you sang it and then people might listen more carefully.”

She laughed and said, “Oh no one wants to hear my singing voice. It’s awful.”

I suddenly realized that I’ve heard some version of the same from a hundred people. I kept trying this experiment all day, with the taxi driver, the baggage claim guy, the secretary at the Church office, a grounds keeper, and anyone else I bumped into. Each time I suggested that he or she should sing something. Each time, the reaction was the same: “oh you don’t want to hear me sing.”

Can we somehow arrange to ban those words from the human language? I wonder if this is darn-near universal that people claim that their voices are awful. People are telling themselves that they cannot do something that they can do. If every one of this people were at a party where “Happy Birthday” was being sung, they would all join in (without music, I might add!) and sing the pitches and the text with gusto. That’s singing, isn’t it?

To be sure, these people don’t sound like American Idol, and that’s probably good insofar as Church music is concerned. In any case, it is not about what we think of as popular performance. We aren’t making recordings here. The results of their singing are not going to be downloaded from iTunes. They aren’t up for some award program. Their only real audience is God.

Why are people so alarmed by the prospect of singing? It has something to do without our consumption-based culture. Music is something we get from CDs, MP3s, video games, movies. It is not something we make on our own. That leads us to believe that singing is only for the stars and the professionals, people who inspire the awe of large audiences.

The best people are able manage these days is a soft version of karaoke, and this is pretty much what our churches are giving people the opportunity to do. We add every conceivable contraption to keep people from taking charge of their own music. We have some (few) real organists but rather than let them solo so we can listen to the beauty the instrument produces, we make them pump out loud hymns in the hope that we can produce a vague text underneath.

We ask pianists to pound away so that if we fail to make a sound, at least something is happening and the church doesn’t fall quiet. We drag out every high-school band member to blow and blast to keep from hearing ourselves. We add guitars, drums, amplifiers, and more, just to bury the sound of our own voices as much as possible.

What if we just unplugged it all and created a scenario in which the failure to sing would in fact result in total silence? This would change matters dramatically. It would be like telling people who had been carrying on escalators all their lives to walk up stairs for once. They would stand at the bottom and look up, mystified why they aren’t moving. Eventually they would figure out that they have to put their feet into motion if they want to get up the stairs. Insofar as the escalators do the work, they have no need to. But when they stop, they walk. That is precisely what unplugging the machine would do.

Well, we need to get off the machine. We need to unplugged so that we can sing, really sing. Once the machines are gone, we are of the rigid system of metrics that has defined music at Mass. That is, most all the music we sing is crammed into a metered structure that is conventional in pop music but not possible when singing the actual texts of the liturgy. The tones and structure of chant are designed to accommodate prose of varying lengths, which means that the melody is free and follows the rhythm of the language itself , making the music a prism that reflects the light of the Word.

This is beautiful and abstract imagery but in order to make it happen, we need that very practical thing, which is the ability to make the music with our voices alone. It’s been so long since we have done that, and some people have never done that, that it is going to be an act of courage going forward.

As time has moved on, I’ve come to appreciate the absolute brilliance of the chants in the forthcoming 3rd Edition of the Roman Missal. The chants are in English. People say that the music isn’t brilliant and perhaps that’s true but all the chants are all brilliant in the sense that they make it possible for people to actually sing on their own for the first time. This is the step that is absolutely essential. There can be no progress without that.

You say that chants in in the Missal are boring? Fine. If your parish is singing them, it is time to move on but this time with a good foundation. There is a wealth of glorious music awaiting them in the Gregorian books. And it is also true that once you get the hang of plainchant and the sense of how it is so prayerful and beautiful, pop music just doesn’t work any more to accomplish the end.

Right now, we have the strange situation in which perhaps 5% of parishes sing music from the Gregorian books at one or two Masses, while the rest are stuck in this cage of metered hymns that nothing to do with liturgical texts and, to the extent that the texts are actually sung, it is to songs that are designed to fit within that same framework – all of it sustained by a elaborate apparatus of accompaniment that tries to sound as fancy and comforting as possible.

How are we to bridge this great divide? How can the large majority of parishes reduce their dependency on the apparatus so that that Mass can be sung in total with integrity and with the voice that God gave us becoming the primary voice again? The Missal chants actually do provide that vehicle to make this possible.

As I’ve talked to groups about this entire problem, I’ve noted that most Catholic musicians cannot even imagine what kind of thing will emerge from this emphasis. They don’t have a model in mind. They’ve never heard it, never experienced it. And yet this is the very thing that that has been pushed by so many documents on music – namely that we sing the Mass. This has been the dream of liturgical reformers for longer than a century. There have been so many fits and starts and the dream has remained largely elusive.

But the introduction of the new Missal this Advent offers a chance for a new start. We only need to sing what we are given, and sing it on our own, and a large part of the battle for sacred music will be accomplished. The rest will require training and focus but at least we will have the essential skill in place. We must walk before we can run.

5 Replies to “What is the Reform Priority for Catholic Music?”