My New Year’s resolution is to post a bit more this year. I promised some comments on Spanish polyphony, so here goes. I had the opportunity to program Victoria’s Magi viderunt stellam some years ago and I wondered how well known this lovely motet is. It’s set in the transposed mode 2 (a favorite of the Spanish), but the frequent Eb’s and cadential F#’s lend it a decidedly G minor flavor. There is a bit of musical imagery at the beginning as the Magi’s melodies travel up and down in a wavy pattern. Note the rise in the line at “stellam” as well. The entire second half of this beautiful work is taken up with repetitions of the 3 gifts, featuring some nice passages of parallel 3rds. I would often take the tempo up slightly at the Alleluia section for a bit more effect.

Victoria’s style is certainly Spanish, but Palestrina’s (or perhaps a general Roman) influence is never far away. Unlike Morales, Spaniards never thought of Victoria as a “foreign” composer. What is Spanish? I hear it in the lower ranges (perhaps to fit the shawm ranges) and occasionally the local chants, when they are present. Also the liberal use of cadential chromaticism is something one hears a lot in late Renaissance and Portuguese polyphony. A joyous Epiphany, everyone!

The score is the Victoria volumes of MME, but also at CPDL

This Sunday our schola will enjoin the congregation in singing both at the Offertory,
and in singing THE Offertory. 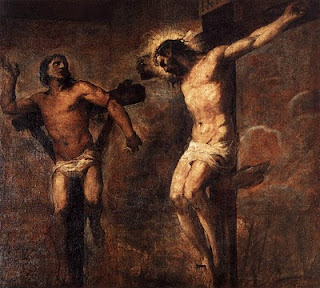 As we know, the gospel for the Feast is the account of Dismas, the “good thief”, acknowledging and defending Christ against the taunts and mockery of the other crucified thief and centurians. It’s interesting to note that Dismas recognizes Jesus as Messiah and true King, despite the legalistic placard that Pilate deemed be noted above our Lord’s head on the cross, with “Jesus, remember me when you come into your Kingdom.” Jesus responds with a different metaphor, “…this day you will be with me in Paradise,” something considerably more than an earthly deliverer.
As we all know, Jacques Berthier’s most familiar composition is likely the musical refrain “Jesus, Remember Me” that congregations world-wide have taken up as easily as any melody ever written. But upon reflecting about this most modest of songs, and its mustard-seed size potential and power, I also remembered that there might just be a kinship between the narrative of the gospel and the actual Offertorio text, excerpted from the verses from Psalm 2  in particular:
Ask and I shall bequeath you the nations, put the ends of the earth in your possession.
Those of us who regularly use the Simple Choral Gradual Propers by the great Richard Rice have likely noticed that he sets his homophony most often in F Major. So, it occured to me that by alternating some repetitions of the Berthier with the Rice Offertory Antiphon links the Old with the New Covenant. So, that’s what we’re going to do this Sunday. I’ll let you know how I think it succeeded or not.

Okay, official post-script- IT WAS GREAT! We alternated three repetitions of the Berthier ostinato, and then interpolated a verse/refrain of the Rice Offertorio. The congregation seemed to be in step with our mp/mf/forte pyramid-crescendo for each of the reps of the Berthier and then we seemlessly moved into the “fauxbourdon” verses of the Rice via the common F Major tonal center. But the neat little shift to G minor of the Rice antiphon provided the ear some measure of refreshment before cadencing back in F Major, and resuming the Berthier. I love synchronicity.

It worked so well at our schola Mass, we repeated it at the ensemble Mass as well with just classical guitar single rolled underpinning. Sweet.

Over at the Musica Sacra Forum, I alluded to the LA Guitar Quartet’s virtuosity. I’ve also shared there the encounter I had one summer workshop with Paul Salamunovich, where I gave him a CD containing the following version of his protege, Morton Lauridsen’s famous “Dirait on” from Rilke’s Flower Poems. Here is a YouTube performance that has the LAGQ version with some shadow imaging.

I would like to dedicate this post to our bishop, John Steinbock, who is ailing and hospitalized with stage three lung cancer and severe blood clotting. Ora pro nobis….

I am looking for a little help and hoping someone can provide it.

I am looking for the Opening Prayer/Collect for Easter (Mass of the Day/Ad Missam in die) in Latin, as it appears in the 1969 missale romanum – not the 2002 edition.

Can anyone connect me to it somehow?

Some of you will remember Fr. Cizcek from the Colloquium. Look at this:

What is going to strike most of us is the choice of music in this video. I was puzzled at first. I am liking it more and more and here’s why: This is a video. It is a popular medium. It is not the Mass itself. If it were Mass, I don’t think Father would have allowed this pop, Euro sound. Coupling this music with beautiful shots of the priest, his actions, and the altar is startling and edgy and exciting. That’s what videos are supposed to be.

What do you think?

Fr. Columba Kelly, OSB, has offered a selection chants for the revised Order of Mass in the new English Translation. These are settings that differ from those that will be found in the forthcoming Roman Missal, but are offered as a supplement to those chants, or perhaps as alternatives. Of particular interest are English settings of Gloria X, Credo I, and Sanctus XV. Find them at the Sacred Music Project.

“Francis Cardinal George, President of the USCCB, has recently announced that the new Missal translations will be implemented for liturgical use on the First Sunday of Advent, 2011. Therefore, the new texts are not yet approved to be used in Mass–not until November 27th, 2011. In the mean time, the task at hand is catechesis and preparation for the use of the new texts.

Fr. Kelly’s settings of the Order of Mass are provided here in modern notation, according to the convention found in the forthcoming Missal. We hope to soon offer them also in chant notation.”

You can download these settings in modern chant notation here.