Assumption Day and the Extraordinary Music Workshop offered by the Dominican Fathers in Kraków coincided with a major Dominican celebration of the Polish province’s 800th anniversary. Today’s Mass, therefore, was the first of a triduum leading to the feast of the province’s founder, St. Jacek Odrowąż, better known in English-speaking countries as St. Hyacinth.

The Mass was offered in Polish, and the church was filled with the generally young participants in the EMW.

Here is a sample of some of the music sung today. I think even the hymns with recently composed melodies have an impressive depth.

It is Assumption Eve here in Kraków, and the city is busy with the three-day weekend. For us, there is even a festival of sacred music concerts, Cracovia Sacra, underway tonight, with events starting as late as 10:15 p.m. at the city’s wonderful churches, museums, and religious houses.

On Sunday afternoon, participants checked in for the Dominican Fathers’ week-long sacred music event in Kraków, the “Extraordinary Music Workshop“, and the events of the program start Monday morning: that is, on Assumption Day.

This will be the seventh edition of the event, but the first with a track of sessions conducted in English. I don’t know what the final attendance will be, but a volunteer told me the count of registrations was over 320, a figure that shows the vigorous interest in sacred music in Poland. Most of that attendance by far is by Polish participants, who know that life in Kraków is basically normal despite the war in Ukraine, whose border is 150 miles away.

All that I can show so far to give a hint of the week to come is in a couple of pictures; first, the main image for this post (above), showing the wonderful St. Ann’s University Church, where some of the liturgies will take place; and a snapshot to show the nice work that has gone into preparing the songbooks for the program:

Plus a little sample of the sound of the organ at St. Ann’s, made a few Sundays ago:

Annual Meeting of the Society for Christian Scholarship in Music 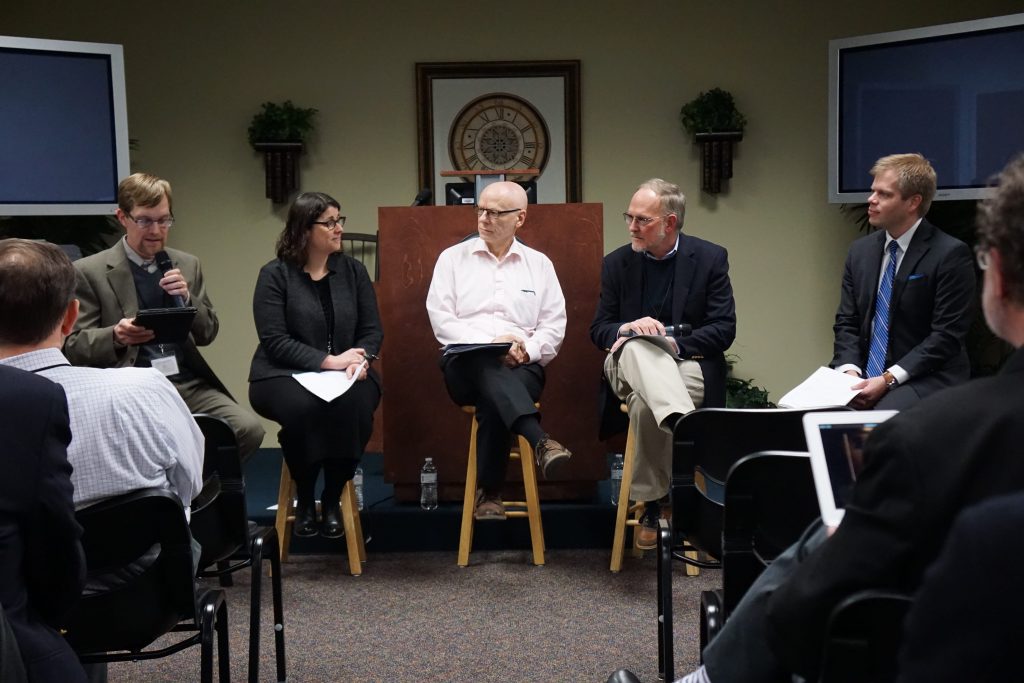 Individual papers, research posters, panels, and lecture recitals on any topic related to the study of music and Christianity are welcome. We invite submissions representing a variety of approaches and perspectives, including ethnomusicology, historical musicology, theory and analysis, philosophy, theology, liturgy, congregational music, as well as other methodologies. All submissions should have a clear title. Lecture-recital proposals should contain the list of pieces with approximate timings.

SCSM encourages submissions from current graduate students. A $250 prize will be awarded for the best paper presented by a graduate student at the meeting. In addition, graduate students whose proposals are accepted are eligible to apply for travel assistance from the SCSM Graduate Student Travel Fund.

Note: We are planning on an in-person meeting, along with some online offerings. When submitting a proposal, please indicate whether you intend to present in person or via online. (Changes in presentation format may be possible, but only up to a deadline to be determined by the program committee.) Regardless, all conference participants need to be available during the days of the conference for synchronous sessions. 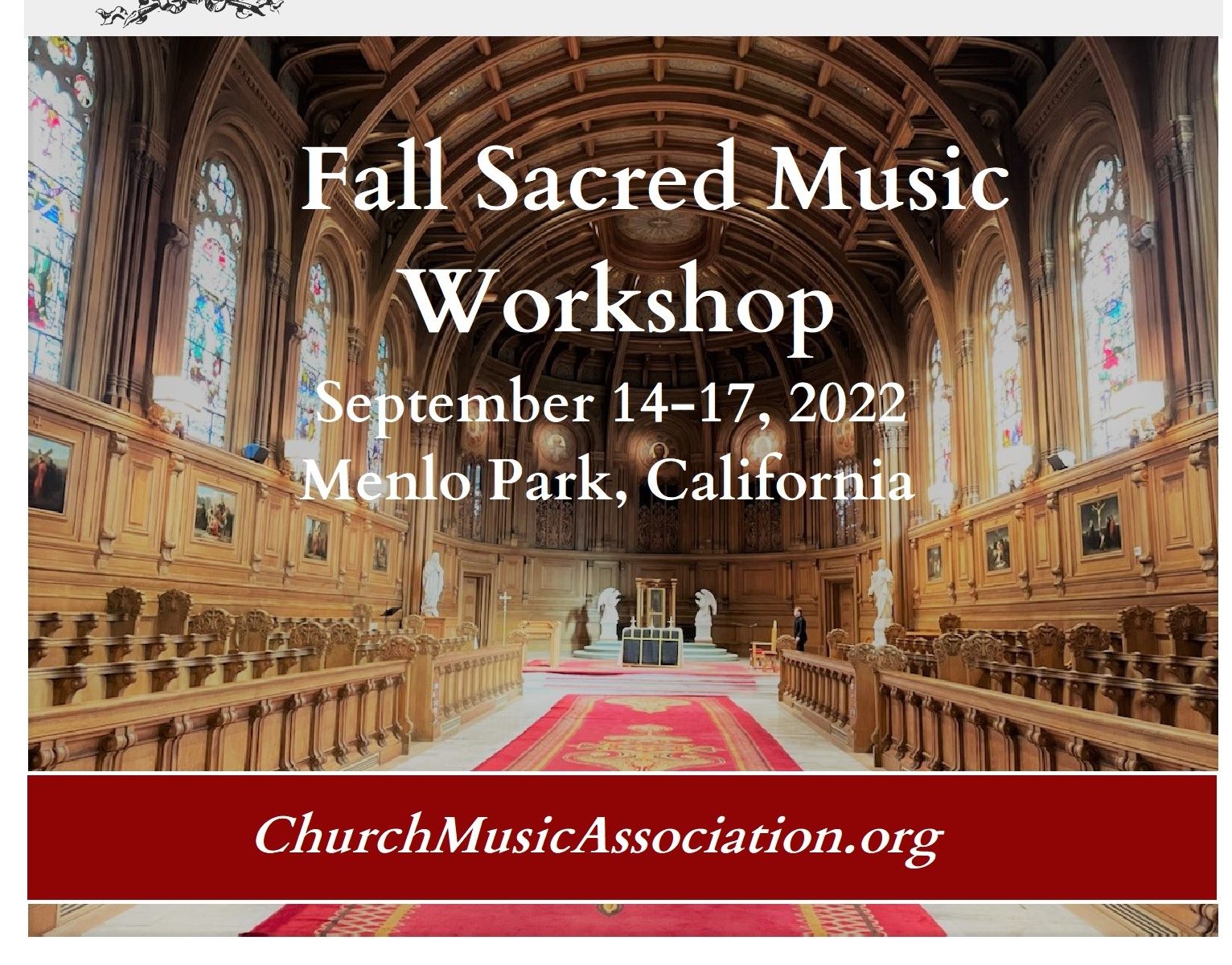 Participate in singing the beautiful liturgies with the CMAA on September 15, 16, and 17 at St. Patrick’s Seminary in the Archdiocese of San Francisco, California. Join in with morning and night prayer and enjoy an evening with sung Vespers and an organ recital.

Lodging will be available at Vallombrosa Retreat Center during the workshop. Full meals and lodging are available for participants. Commuter options also available.

Liturgies will be at St. Patrick’s Seminary.

Get all the details here: FALL WORKSHOP

A reading from blessed Paul the Apostle to the Corinthians. Brethren, purge out the old leaven, that you may be the new dough, as you are unleavened.

Sing to the Lord a new song, for he has done wonders.

For Christ our Passover has been sacrificed.

A marvelous thing, a new thing, a holy thing!
Praise the Lord, all his Angels,
praise him, all his Powers.
As the coin has been found [cf. Luke 15:9],
clap your hands, O creature,
O future goddess to be applauded.

Therefore let us keep the feast: not in the old leaven, nor in the leaven of malice and iniquity, but in the unleavened bread of sincerity and truth.

(A troped epistle from the 12th century, my translation. Source information is in volume 49 of Hymni inediti. Liturgische Hymne des Mittelalters.)

SEVEN LAST WORDS FROM THE CROSS & ONE EQUAL MUSIC

James MacMillan’s Seven Last Words from the Cross (1994) is one of the most intense works of choral music written in the last generation. It is a large piece in seven movements, each reflecting on one of the dying statements of Christ as recorded in the gospels. MacMillan borrows freely from traditional sources such as Scottish funeral laments and the ceremonies of Holy Week, adding his own distinctive musical style and vast emotional

range. MacMillan’s One Equal Music (2016) was commissioned by John Morrill in memory of his wife, Frances. The text is taken from a prayer by John Donne. The Portland performance will be the North American premier of this new work.

Mr. Hill has had a long association with Cantores in Ecclesia, beginning in 1987, when the choir sang for Mass in Westminster Cathedral in London. He came to Portland the following year to give an organ recital and to conduct Charles Marie Widor’s Mass for Two Choirs and Two Organs. Since then, he has conducted Cantores in Ecclesia on several occasions over the years.

For over thirty years, Cantores in Ecclesia (singers in church) has specialized in Gregorian chant and sacred polyphony within the liturgical context of the Latin Mass of the Catholic Church.  Cantores in Ecclesia has sung for concerts and liturgies at home and abroad, including tours to Mexico, Spain, France, England and Italy, and has recorded compact discs, including three chant recordings for Oregon Catholic Press. The choir has been featured in print media and on the internet, including articles in BBC Music Magazine, Brainstorm and The Early Music Review, and has established itself as a leader in liturgical performance, winning loyal supporters at home and gold medals in international competition. This August marks the 23st season of the choir’s William Byrd Festival (www.byrdfestival.org), an annual gathering of musicians and musicologists for two weeks of lectures, sung liturgies, recitals and concerts in honor of William Byrd, widely considered Renaissance England’s greatest composer.  Cantores in Ecclesia, Ltd., is a 501 (c) 3 organization.

The Catholic Sacred Music Project will be hosting its second Choral Festival for Young Professional and Aspiring Church Musicians June 26-July 1 in collaboration with Sacra Liturgia at St. Patrick’s Seminary in Menlo Park, California. Martin Baker, the distinguished British choral conductor, will be the festival conductor and lead the participants in singing Palestrina’s Missa Papae Marcelli for an Ordinary Form Mass celebrated by Cardinal Pell as well as a concert of choral music of living Catholic composers. The daily program will include intensive rehearsals, communal meals, panel discussions on sacred music, as well as all of the Sacra Liturgia liturgies and addresses given by Cardinal Sarah, Cardinal Pell, Archbishop Cordileone, and Dr. Jennifer Donelson–Nowicka.

The Catholic Sacred Music Project was founded in 2021 to provide spiritual and musical formation for Catholic musicians in order to effect a widespread renewal of sacred music in the Church. Through intensive encounters with leading musical artists and performing masterworks from the treasury of the Church’s musical tradition, Catholic musicians are given the knowledge and skills they need to serve the Church more faithfully and to renew and develop its culture of sacred music.

All interested musicians are encouraged to apply though space is limited. Applications will be accepted until April 9 and evaluated no later than April 16. For more information, visit the CSMP website: https://www.sjbsacredmusic.org/