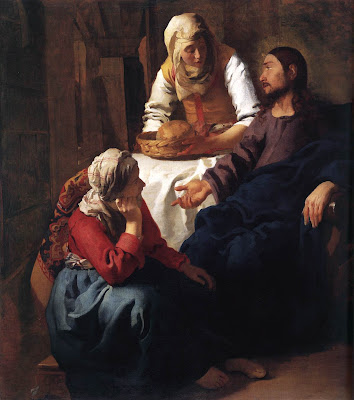 Those are fairly ubiquitous words in our domain. And as naturally as they are invoked by our tongues and pens, and as is natural with things of this world and in the Enemy’s parlor dubbed “cyberspace,” we who treasure these words tend to, at best, pay lip service to them when provided the opportunity to turn them from abstractions to actions. This human flaw reminds me of folks who regard Jesus Christ as their own personal “Teddy Bear.” Such people are as nice and cuddly as their own “Make a Jesus” doll, until someone else wants to share that joy and transgresses by wanting to hold that doll for while, themselves. Then hell hath no fury…

We can talk, type and sing a good game about “Jesus is my personal Lord and Savior” on OUR blogs and journals until we’re literally blue in the face, but we’re still neck deep in the big muddy of The Fall: whether we’re God’s greatest creatures ever, not only about to step in a cow patty, but to taste it as well! Or those creature’s progeny, a sibling who would crush another’s skull out of jealousy and pride. I’m reminded of Al Pacino’s “Satan” character in “The Devil’s Advocate” schooling his “son” about how each of us thinks we’re each and solely “God’s special creature” and that we’re immune to the lure and stench that is Gehenna.

This café is about LOVE, LITURGY and LIFE. It is about our Lord’s work. And though we may still be a needle stuck skipping on the turntable of the Fall, we must never forget that Jesus was present then, before then, and is present now and evermore. And it doesn’t serve Him or us well to turn that reality into a pathetic parody of Bosch’s “Garden of Earthly Delights” because we have forgotten about approaching His Father with “fear and trembling.” Oh, and after reconciling with each other. Yes, really.

I’m getting up there. Yesterday was my eldest’s 35th birthday. Before going to dinner, I re-watched the film “The Book of Eli.” No spoiler alert necessary, but I hadn’t quite caught in previous viewings the explanation that Eli offers his companion of why he yielded his noble quest and treasure- “I lost sight of what the book had taught me- to help someone else rather than myself.” So, now that I’m trying, real hard, to become more circumspect in my thoughts, words and actions, I ask myself a theoretical question about one of my elders: “What is more valuable to me, Professor Mahrt the man, or Professor Mahrt the oracle?” (You can substitute your own mentors’ names.) Of course, that question is absurd. Jesus Christ obliterates that question as utterly meaningless. Our integrity as God’s special creatures is made manifest only by His Incarnation. If we name Him as Lord, then what are we to then do? Feed His lambs, tend His sheep.

I was very well fed at Colloquium. Near as I could tell, so were many others so tended. Even after a quiet, profound exit from the flock, there apparently were many other Christs who, without knowing me, awaited our meeting so that they could tend to me and feed my soul with blessed assurance that Christus Vincit et Regnat. I’m speaking of one of our member’s daughter, the most beautiful child I’ve ever seen. This little cherub couldn’t quite run the two hour race of the closing Mass and her amazing mother sacrificed her goal of “being there” in the midst of the assembly of heavenly hosts and God’s faithful preparing for COMMUNION. I’m speaking of my wife, who, a day before at that same Mass subsumed her spirit and voice among those same hosts under the angelic direction of Wilco Brouwers, sprinted over fifty feet with 17 pins in a still-healing left ankle to get to her husband’s side as I groaned on a wet Pittsburgh street in agony. I’m speaking of a burly delivery man who came to her aid, helped her to raise me up to a sitting position, called 9-1-1, and when he asked “What brought us to Pittsburgh?” we answered “a Gregorian Chant retreat” said, “Cool!” I’m speaking of EMT’s, nurses and physicians at Mercy Hospital ER on a mid-day Monday who never lost sight of me and my needs though level one traumas were streaming through the doors minute after minute. I’m speaking of a couple of nuns at Mercy who gravitated towards us amid the maelstrom with nothing more than calm, open smiles and pithy conversations while I mantra’d the heck out of the Rosary awaiting any meds. I’m speaking of regular, faceless folk at two hotels who, without pause or annoying caveats, re-arranged our lodging because of the accident, and did so gladly. (One knows these things, because when it happens in this era, it seems oddly unexpected that people are actually accommodating and humble.) And so on and so forth.

I’m still feeling a bit alien posting on this site. The “I’m NOT WORTHY” insecurity that so easily rises like bile in my mind. Yes, my name’s Charles, and I have self-esteem issues. ‘Hi, Charles!” I may not be capable of grasping the quantum physics of the isolated punctum, but like my new best crazy bud, Ralphie, I know it’s the coolest thing I acquired this last week at colloquium. It’s better than Gatorade, for sure. Magnificat anima mea…

This is the Chant Café. This is not the Cat Café. As I said (to the eternal consternation of my beloved) I’m getting up there. The older I get, the less trivia I know or remember. But the older I get, more is my desire to emulate our Blessed Mother’s humility and acceptance. But as beatific as her visage is depicted by Michelangelo’s marble monument of her “Pieta,” I cannot but think that at that real moment in time, weariness also would have been recognized in her eyes as she cradled her lifeless son’s corpus. But her humility and trust in her God, her eternal heavenly Spouse prevails always.

So, can we meet in the little loges of this blog without the tedium, the trivial, the weariness? I am the last person who wants this little enterprise to be some sort of liturgical Disneyland. But if we choose to park our gluteous maxima’s in a comfy chair with either a latté or a triple espresso in the comboxes, how difficult would it be, really, to sit back rather than lean forward? To listen rather than to “hold court?” To tend, rather than direct? To share, rather than to contradict? To laugh with each other, rather than to take pleasure from the scorn of others? To celebrate “love, liturgy and life” rather than to roll in the slimes of our own making?

I’m talking to myself while my angel never stops singing joyfully to my deaf ears.

“If my people, which are called by my Name, would humble themselves…..”

PS. As I finished this post, one of our vicars called and informed me that my bass section leader, Frank, fell from a ladder this morning with significant head trauma and possible vertebrae issues. He’s been transported to the regional trauma center for surgery. Please offer prayers for my friend, Frank.

One Reply to “Love, Liturgy and Life”