Skip to content
After seeing Kathy’s post, I decided to write my response to it!
Understandably, Kathy covers more about women’s dress for Mass then mens’ dress for Mass. I do agree that women don’t have to dress with formal business dress for Mass, since women have so many more options where they can still dress up without being as formal.
That being said, I do disagree (somewhat) with her use of the word casual. I understand what she is trying to say, but while a lot of Sunday Mass appropriate dress could be considered casual, I certainly not all casual dress appropriate for a Sunday Mass. Guys don’t have to go with business dress to dress up for Mass (though that’s often just the easiest). Guys still have options to dress up without simply wearing a suit and tie.
You could go with a button-up, sweater, and tie (bow ties are my ties of choice, but regular ties work too). Even just a button-up and tie alone is good. And throwing in a good hat is always a good finisher. Again, there’s many more options to change things up. What guy doesn’t look more classy in a nice hat?

If by casual, you mean something like this, by all means, dress casual for Mass. 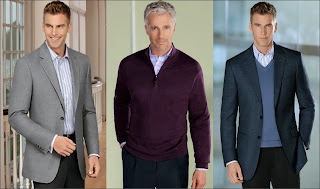 But when many people say casual, they picture bermudas and flip flops, which is most certainly not appropriate for a Sunday Mass.