Skip to content
I am delighted to be able to announce the locations, speakers (among which are numbered several Chant Cafe contributors and CMAA colloquium speakers), topics, and liturgical plans for Sacra Liturgia USA 2015, to be held in New York June 1-4, 2015. The conference will include four liturgical celebrations (usus recentior, usus antiquior, and Dominican rite) which make rich use of the Church’s treasury of sacred music, including some modern choral pieces, classical polyphony, organ masterworks, and Gregorian chant. Church musicians will find much to benefit them spiritually and professionally at this conference. 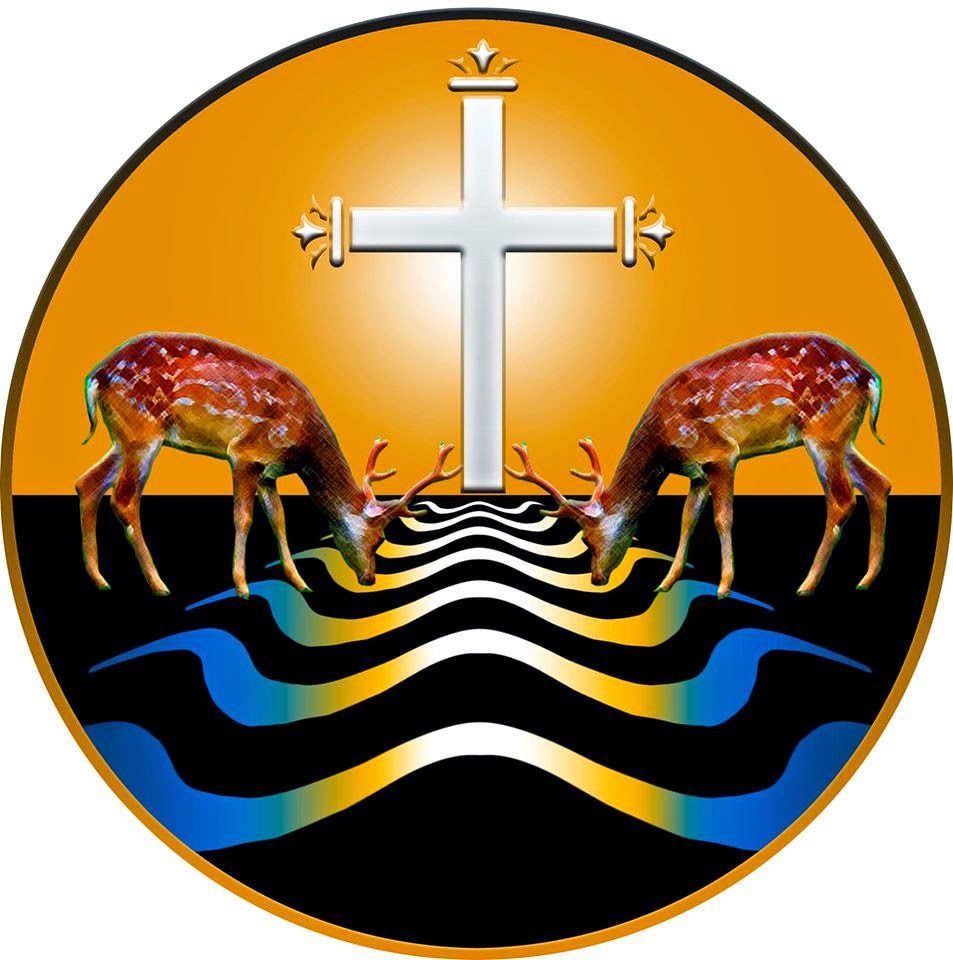 www.sacraliturgiausa.org
contact@sacraliturgiausa.org
From June 1-4, 2015, an international conference on liturgical formation in light of the new evangelization will be held in New York, under the title:
SACRA LITURGIA USA 2015
CULMEN ET FONS VITÆ ET MISSIONIS ECCLESIÆ
Continuing the initiative of Sacra Liturgia 2013, organized by Bishop Dominique Rey (Fréjus-Toulon, France) in Rome, this conference seeks to support the Church’s saving evangelistic and catechetical mission, as well as the continued revitalization of the liturgical life of the Church, especially in the United States.
The sacred liturgy plays a central, vital role in the new evangelization, attracting souls to the heart of Christ and His Church. For the baptized, the sacred liturgy resides at the heart of the Christian faith and life — indeed it is the “source and summit of the life and mission of the Church.” As Bishop Rey stated at the opening of the 2013 conference in Rome, “The sacred liturgy is not a hobby for specialists. It is central to all our endeavors as disciples of Jesus Christ. This profound reality cannot be overemphasized. We must recognize the primacy of grace in our Christian life and work, and we must respect the reality that in this life the optimal encounter with Christ is in the Sacred Liturgy.”
The conference brings together a wide range of renowned international speakers including Raymond Cardinal Burke; Archbishop Salvatore Cordileone (San Francisco); Dom Phillip Anderson, OSB (Abbot of Clear Creek Monastery); and Dom Alcuin Reid (Monastère Saint-Benoît, Diocese of Fréjus-Toulon, France); among others. See the appendix for a complete list of speakers and topics.
Topics addressed at the conference will range from broad subjects like the relationship between liturgy and culture, Catholic identity, youth, the arts, and Catholic education to specific questions like the mid-20th-century changes to Holy Week and the post-Vatican-II reform of the calendar and lectionary. Lectures will take place at the Kaye Playhouse at Hunter College (68th Street between Park and Lexington Avenues) which is conveniently located at a subway stop.
The conference lectures will be augmented by working sessions for those in Catholic higher education. Sponsored by The Cardinal Newman Society, the sessions will facilitate a conversation about renewing the liturgical life of Catholic colleges and universities to support the intellectual and moral formation of students and faculty in the Faith.
At the heart of the conference are the liturgical celebrations. There will be Solemn Vespers in the usus antiquior, a Sung Mass in the Dominican rite, and Solemn Pontifical Masses in the usus recentior and usus antiquior. The Solemn Pontifical Mass in the usus antiquior on the feast of Corpus Christi, celebrated on Thursday, June 4th, will be followed by a Eucharistic procession in the streets of New York. Liturgies will be held at the Church of Saint Catherine of Siena (411 E 68th Street), a beautiful Dominican parish on the Upper East Side.
With the prestigious lineup of speakers, as well as the beautiful liturgies planned, those attending the conference will come away with a rich experience of the intellectual heritage and liturgical life of the Catholic faith. The serious intellectual inquiry into the sacred liturgy will prove fruitful for both academics and laymen alike. Attendees will meet Catholics from all over the world, and be afforded the opportunity to build good working relationships with others of those seeking to deepen their love of Christ through the Church’s liturgy, and to continue their work for liturgical renewal.
Approximately 300 participants are expected. Registrations for the whole conference will open on January 1, 2015, and part-time registrations will be possible beginning at Easter. More information about registration, affordable housing, and locations is available at the conference website: www.sacraliturgiausa.org.
The conference is being organized by Rev. Richard Cipolla, Ph.D., D. Phil (Oxon.) and Jennifer Donelson, D.M.A. Media inquiries may be made to contact@sacraliturgiausa.org.
The organizers are grateful to His Eminence Timothy Cardinal Dolan for his kind permission to hold this conference in the Archdiocese of New York, as well as the gracious welcome of the Dominican friars and staff at Saint Catherine of Siena Church. This event could not take place without the generous support of the conference sponsors: the Knights of Columbus, The Cardinal Newman Society, de Montfort Music, Regina Magazine, Granda, Cantica Nova Publications, the Society of St. Hugh of Cluny, and the Church of Saint Catherine of Siena.
Speakers and Topics
Dom Phillip Anderson, OSB (Clear Creek Abbey)
Living the Liturgy: The Monastic Contribution to Liturgical Renewal 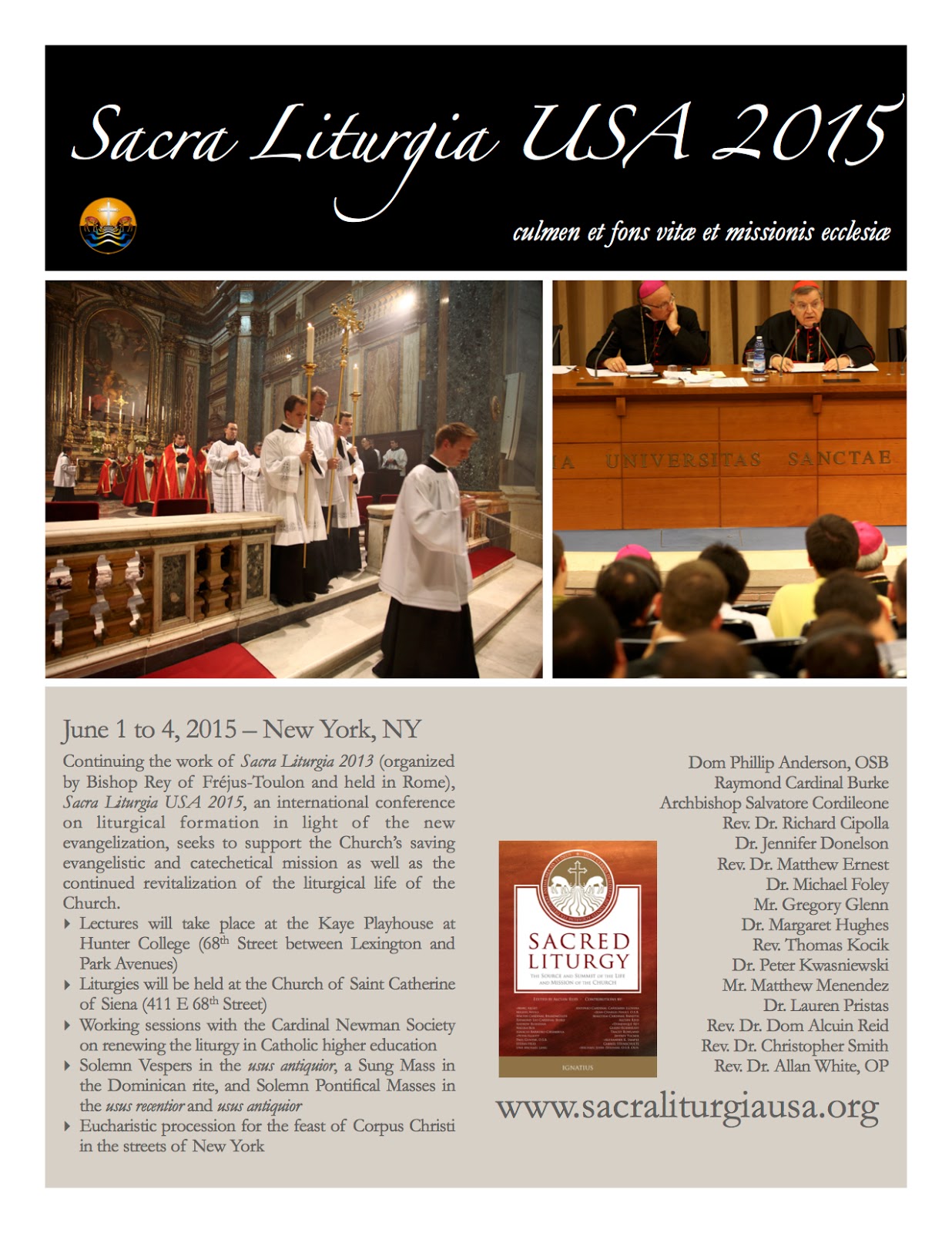 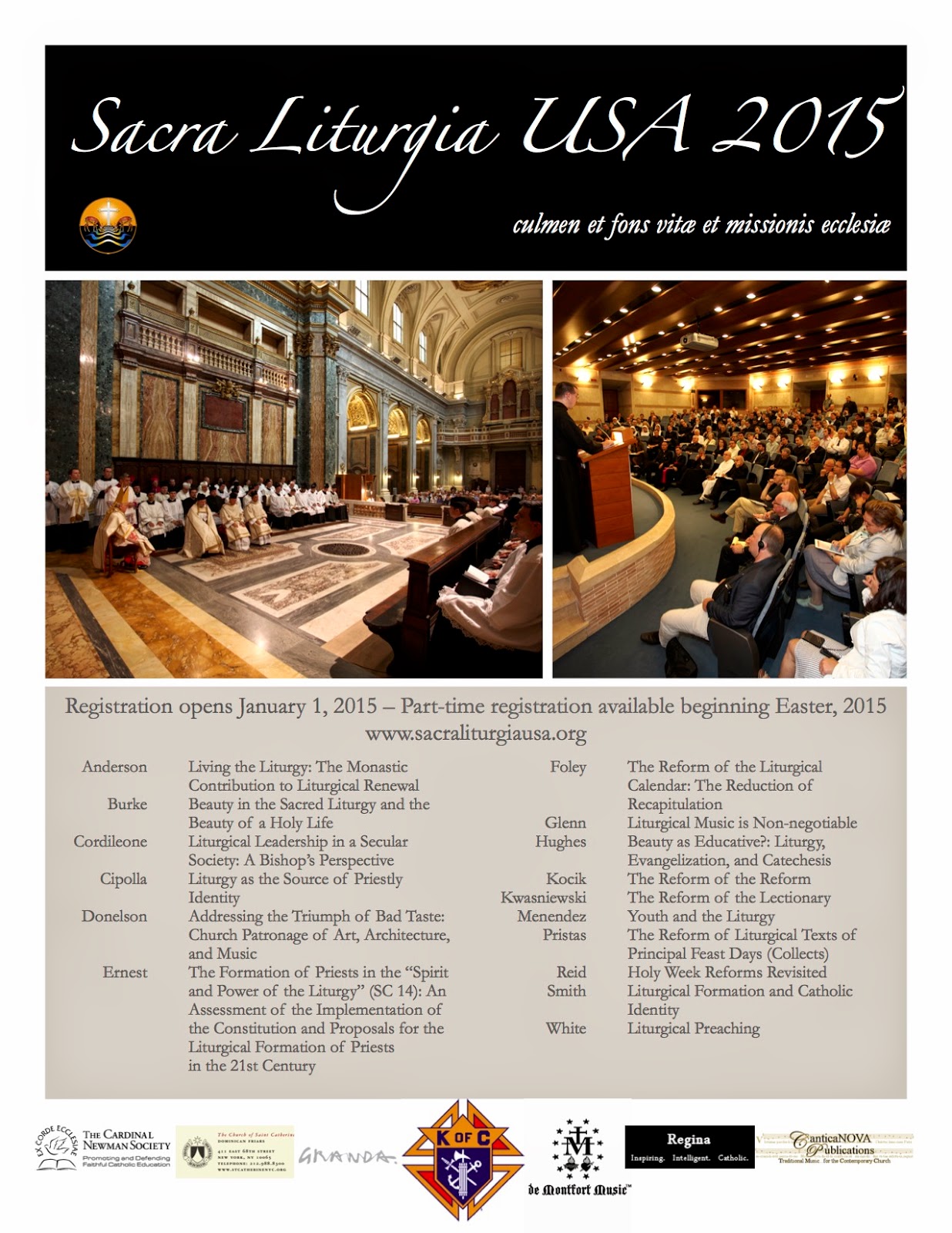