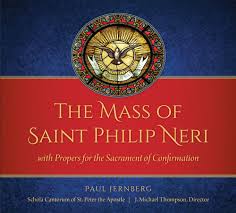 I don’t know if it was God’s master plan or God inspiring Jeffrey Tucker years ago, but I’ve been blessed a number of times by a number of composers to review their works at the Café. In many a combox I’ve touted many Mass Ordinary settings which I’ve vetted (a very risky, personal choice) by the real process of having them sung by our schola and the congregation/ministry at our 8::30am Sunday Mass. Our schola’s nucleus membership is two decades along. I’m, at heart, a choral guy and they are chorally inclined. We have sparingly employed Gregorian Masses, or simile settings by folks like the great Ostrowski in unison. But choral floats our boat.

After one of those toutings at MSF or somewhere, Paul Jernberg (and his cohort, my old friend and greatest choir director of my era, J. Michael Thompson) took notice of my exuberance. So Paul honored me by asking for a review. It’s been a weird summer, total staycation, lots of physical injuries to me and mine, yada. But I promised Paul I would review what I know after at least one year’s use (according to Wendy) that I’d give a personal, seasoned look-see.

MASS OF SAINT PHILIP NERI
First of all, for those who’ve not only purchased the score but also listened to JMT’s inspired recording (complete with real canting lectors, deacons and celebrant), Paul Jernberg’s setting is probably the most ideal setting according to the intents and purposes of the three principal documents of the Vatican II liturgical documents, and for that matter the 1903 motu proprio of St. Pius X, Tra le sollecitudini. By that I mean not only is the sole instrument of worship is the human voice, but that the entire ritual in the ORDINARY FORM is rendered with the same ideal and intent of the Solemn High Mass in the EF. Simply, this is the embodiment of the latest exhortation “Sing THE Mass (not sing at Mass.)”
That said, in full disclosure I have to confess that though my group can render this and other similar works (the choral settings by Richard Rice come to mind) a capella, blessed with an extraordinary organist, we sing the Jernberg with organ. Secondly, I’ll only comment upon exactly what portions of the setting we’ve employed as we’ve not a celebrant whose talents could enable us to realize the piece as intended (tho’ I am working on that!)
For the last year we’ve used Paul’s “Lord, have mercy II” after the Confiteor. Wendy intones the first iteration, the choir enjoins the second in SATB, and we’ve chosen to nine-fold it with a second repetition. The elegant factor about that choice resulted from the deliberate upward terracing of each of the intonations. The congregation can clearly hear the shift per invocation moving up a third by the cantor, but we’ve found that in addition we’ve noticed the subtle ability of the congregation (in all movements for that matter) to sing ad hoc what they perceive as the choral harmonies. It’s quite something.
The cadence of the Kyrie  we’ve  chosen to “imperfect” so as to have the tenors end on a Bb. (Mea culpa.) But that sets up a simple invocation for the celebrant or cantor to intone the “Glory to God in the highest” in a descending scale from Bb4^ to tonic  F to which the congregation and choir respond “and on earth…” We take this response at about allegretto, or q=104. The fairly close-voiced homophony (eastern emulating ala Proulx’s Oecumenica) allows the altos and tenors to add some sweet jelly passing tones to the bread and peanut butter of the bass and soprano lines, all of which are, again intuitively learned and taken up by an aware congregation. Jernberg adds a quarter-note triplet that moves downward in all voices from “heavenly” to “King” and which serves to set a transition to the reverent allargando “Lord Jesus Christ” which eventually leads to the relative D minor with some carefully prepared secondary dominants in the alto voice, with an abbreviated cadence at “Son of the Father” ending on Vs4-/V (As-A) which then resumes with an a tempo (or accelerando) “you take away” still in the relative Dminor. There is simply very well planned propulsion which I believe is precisely what “Gloria” settiings must employ. Remaining in Dm, the altos are repeatedly featured with the prepared suspended fourth of the dominant AMajor, which they must crescendo over 2 beats at repeated cadences before relief on the third beat of a semi-cadence. And then the propulsion reappears at “For You alone….” which then emphatically prepares, via two quarter-triplet figures, the declaration “Most High, Jesus Christ.” Just brilliant. And the final cadence uses the Dminor to set up via Gminor 2^  to I6/4-V to “home,” F on “Father” sung at a forte (full, not loud.) Then we drop to piano for the Amen.  I can hear Officer Marge Gunderson from the great film “FARGO”  saying “Easy as pie!”
The balance in Part II