Skip to content
Just musing over this homonym pairing: “pilot” or “Pilate.” Raise your hand if you knew this already from the article title? You there, Ben Yanke, put your hand back down! Only Kathy and Geri got it off the bat. 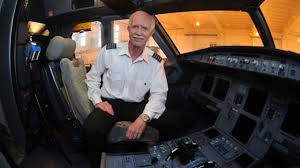 Among the spectrum of definitions of the term “pilot” I found this one particularly apt to serve as an analogue to our profession: “A person with expert local knowledge qualified to take charge of a ship entering or leaving confined waters.” In other words, someone who has the helm, the wheel, the knowledge and qualifications to steer a vessel from harbor to harbor. And it occurs to me that “expert local knowledge” also presumes that a pilot must also possess qualifications and understanding of the universal, or global body of knowledge pertinent to being successful. Presuming we have expertise, do we operate from both local and universal perspectives? Or do some of us navigate from instinct, personal preference and convenience?

Pontius Pilate served as a prefect under Tiberius, and of course presided over the “trial” and effected the crucifixion of Yeshua bar Yusef. A cursory look at the definitions of “prefect” bear little resemblance to its holdover meaning of those prelates at service to the Church now, in point of fact most of the descriptors have its meaning focused in military control and terms. In that light, he could be compared to Union General McClellan who, almost at every turn like Pilate, was hesitant to decide or pull the trigger so to speak for reasons only known to themselves. Before we look at the more serious factors of this particular Roman prefect, I have a couple of anecdotal thoughts. First of all, this “Pīlət,” like many of the historical, institutional officers of our Church past and present, absolutely did not listen to the counsel of his (their) closest female advisor(s) and confidante(s), Claudia-in Pilate’s case his wife. Let’s presume our modern ecclesial clerics don’t have wives whispering and wagging towards their ears, but her fears were prescient. Maybe if Pilate has listened to her earlier in his careerism, he might not have ended up the chump he became in Judea. Then, after the debacle of the crucifixion he might not have “lost the juice of his mind” as a former bishop used to quip. Anyway, how many of us are unable, or have been disabled for whatever reasons, the credibility of our office and resources out of fear from above and below? How many of us, under the pretense of popularity, trendiness, unjust sanctions or sheer resignation, are held sway by the principles and opinions of others, and have no personal convictions that we would stand for and defend? From Wikipedia: “In all four gospel accounts Pilate lobbies for 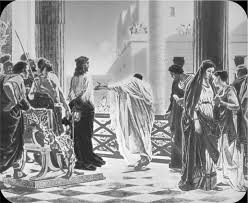 Jesus to be spared his eventual fate of execution, and acquiesces only when the crowd refuses to relent. He thus seeks to avoid personal responsibility for the death of Jesus.” My problem with that characterization is whether Pilate actually “lobbies” for Jesus. Lobbyists, as I understand them, are advocates for their own personal interests first, and for lawful recognition of those preferences second. The prefect Pilate lobbied only for the sake of his reputation and stature among the disparate elements of Jerusalem. “How’m I doin’, folks?” How’d that work out for you, Pontius? Like the prefect, we also serve at the pleasure of higher officers and laws particular to our Church institutional, but we also aspire to serve to the highest authority, the One whom Pilate tried to distance himself from condemnation. Whom do we first serve? (To thine own self be true!) If you are disciplined, you must presume that your superiors vouchsafe the same values upon which you stand. And if that becomes difficult to discern, or seems actually to be at odds, then you have a choice: 1. Advise towards consent; or 2. Retreat to simple compliance. Or is there a third way? To be continued…

2 Replies to “Which kind of “Pīlət” are you to your music ministry? Part One”