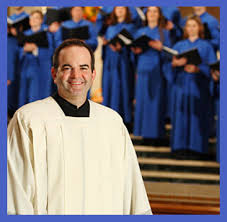 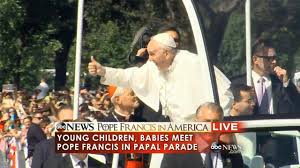 Preamble: As I don’t tweet, could someone send one from me to Raymond Arroyo and his Papal Posse? “Gentlemen, if the summit of our witness is the Mass, could you not ‘gab’ during the reception of the Body of Christ? The music, such as it may be, is the only necessary accompaniment.” Sheesh.

Okay, Deo gratias in that this was not Nationals’ Stadium redux.

I don’t have the Ordo. I heard the entire Mass of over 3 hours. Actually it’s still going, and I hear the gritos of the Latino faithful that normally I only hear on December 12, which is oddly juxtaposed against the deacon’s “Ite Missa est.” Hmmm.

I’m not going to get all tendentious. But I’m gonna plea ignorance on many fronts. First, I had to wonder during many moments throughout the liturgy, what innermost thoughts might HHFrancis might’ve crossed his mind hearing the music ministry at certain points. (The following is satire only, for entertainment purposes only.)

*Americans sure do put out the dog for popes, n’est ce pas? They really are on a mission from God to prove they can out-sing any choral ensemble on the planet, even if little of it is authentically “Murican.” That “Laudate Dominum” seemed to be taken up quite well. Que? Written by an Englishman? I think I’ve heard of this Briton, Sir Thomas Beecham, si?

*Ay, I get out of St. Peter’s to get a rest from those pesky Capella Sixtina’s alternating the Missa de Angelis, and I get the musical tennis match not only during the Gloria, but after the Entrada! El Coro de Azul is mas bueno, though.

*The Aleluya, it’s really simple, mi amigos. But I had to stand up for another 5-10 minutos before the Gospel, and then you need to sing it again?

*Wasn’t it muy bonita that the Oracion de los fidelis had so much going on: all the lovely tones of the Asian languages, the deacon’s “Te rogamos al Senor” (e’er so quickly translated repeatedly by Raymond Arroyo into the lingua franca of the Estados Unidos) with English, Latin, Spanish responses? Ay carumba.

*Speaking of “Ay carumba,” those coros brought the casa down with Lorenzo Florian, some sort of New World “villancico” secretly composed by Monteverdi (actually Zumaya) when he snuck over to the missions and performed by the opera company of Milan (odelay!), and then a very short, very lovely spiritual hymn allotted the Gospel Choir sung (muchos gracias not at fff but at pp, I wanted to kiss the drummer, but it ended too soon!”)

*Peppy Santo! Quido told me they were starting with “Hosanna” as an estribillo. Okay. I don’t think I’ve ever heard it that way before….. the nice lady sings “muy grande!”

*Tres horas! Santo Sciatica! What were those canticos at Comunion again?

*Maybe I will order the Rosetta Stone “Ecclesiastical Latin” from Amazon after all. Quido, take a note.

*One more thing, Guido, thank Maestro Latona for me, and then get me Dr. Osterman on the telefono, pronto.