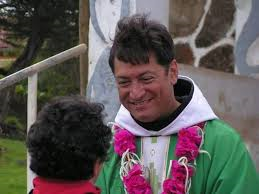 Between the myriad scandals in Ecclesia, the Regnum and in Terra, I need to purge myself of attraction to the electro-magnetism of hype, and focus upon something good and holy.

So,  in concordance with recognizing Saints thus canonized as perfected, I’d like to identify someone whom, to me, has presented as sainted to me. Simple story.

It’s no secret that I have an atypical association with CMAA. I am completely  enchanted and subscribed to my fellows’ mission and ambition. But I also have some divergent views and opinions as to the efficacy of any exclusionary prejudices that I often see as polemic, dismissive or conveniently ignorant of merit as to composers, repertoire and practice. Let’s not focus on that.

I would like to simply tell you why CMAA is valuable to me in (Name that tune) two notes. Those two notes are “Francisco Nahoe.”

Friar Francisco Nahoe first caught my awareness attention at the Indy Colloquium (2014? I’m old and infirm.) Initially that awareness was simply based upon a nebulous, ineffable (I love doing that!) presence that he manifested in our schola and choral rehearsals. Here was this rock-solid and edifying personage quietly participating in ensemble in the tenor section, apparently so self-effacing that I had not even noticed him in Salt Lake City 2012. What I did notice was his carry bag. It was obviously hand-made, had an indigenous look to it, it was somewhere between cobalt and royal blue, and it was so …. humble. I didn’t pay much further heed to it, or to the man.

The day of the Mass we were to serve at, we assembled for the last (dress) rehearsal under Horst, and we had all managed the multi-spiraled staircase to the organ gallery and squeezed into the choir stalls. The gentleman friar and I were next to each other at the Gospel end of the pews. Sometime amid the pre-Mass rehearsal I felt compelled to compliment him for the carry bag. I was in my usual state plus one: Horst had given me an intonation for one of the Ordinary or Propers, and I wasn’t tip top and a bit worried. I think the friar had a good bead on me. So when I commented casually to him about the bag, he immediately replied “It’s yours” as he emptied his stuff from it. It just so happened this was on my birthday. I cannot describe the feeling, and I love describing things, loquacious as I be.

I never caught his name. Mass was beautiful, I did well, the bag was awesome, it was a great birthday celebrated later that night at the great Italian restaurant with my Midwest friends. But I remember more than all of that the absolute embodiment of Christ this friar projected the whole week.

I came to know his identity because of his voice. Listening to Immaculate Heart Radio quite fully and daily, that voice print became apparent as the friar. This friar was one of the two priests who recorded the daily Gospel readings for IHR. I caught the phonetics of his voice after recognizing that, and googled the phonetics. And I was then graced to actually see his bio and his “images” come up on-screen.

I had occasion this week to think of him as someone eminently qualified (through following up on his google hits) as a parish missionary presenter for the upcoming Year of Mercy. And we made contact this week, though we couldn’t do “business” for this year.
There are likely for everyone people whom you’d ascribe to be personal saints. For me, there aren’t many of those folk in my acquaintance  who are also ordained. But first among those very few, is Friar Francsico Nahoe, OFM.

7 Replies to “Backstory from one colloquium, an encounter with Christ”