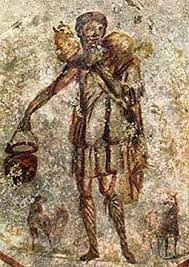 I mentioned in my first review of select pieces from Dr. Peter Kwasniewski’s SACRED CHORAL WORKS that I would review three pieces that though obviously deigned for choral performance, might be rendered with the soprano voice serving as the congregational melody if a worship aide were provided to all. The next piece in that vein is his “Agnus Dei III” found on page 24 in the volume. Without belaboring the theoretical harmonic progressions in as detailed a manner as the first review (Kyrie III) I’d like to simply restate that Peter possesses an uncanny, modest but powerful knack for creating ever so slight moments of pure bliss that makes analysis almost unseemly. And he does so with a larger intent in mind because his prepared and multi-suspended cadences are examples of sheer beauty and sometimes surprise. The structure of this setting is AAB. In “A” one of those transient moments (key signature, four flats) is though the work starts in F minor (Brief suggestion, have the tenor start on middle C on beat three) upon the second beat of m2 on “Dei” he resolves a suspended V chord with a dominant 7th in root position but sub-cadences to the relative major, Ab. It’s like the first bite of a really good Scottish shortbread, it unwinds rapidly and smoothly on the palate and then it’s gone! He has a couple of other passing moments, first in m4, beat 2 (pec-ca-ta) and beat 4 of m6 (mi se re re) that make life very much fun every Sunday for choristers, but the last three measures of section A, “nobis,” features a cascade of suspension/resolutions that seem to prepare for a cadential finality on the V of Fminor, his bass lands and holds on VI until beat four, and then reposes on major I, Ab in close position. Now we’re not talking cookie tasting, but wine tasting!

And the getting through the “hints” to the sublime finish is smooth and leaves you wanting another, thank you.

In the “B” section I’ll briefly mention that tracking tonality shifts and centers is counterproductive for this review. Peter expands the tessitura and employs chromatic voice leading in the bass and alto voices to beat the band. And that sets up an impetus for another three measure section (the first “Dona nobis pacem”) that uses counterpoint in the outer voices exquisitely. He then provides two possible coda like reiterations of “Dona…”, the first of which is more austere, and the second more consistent with the two previous three measure cadences. I could easily see this used in parishes where the fraction rite occupies more time because of congregation size, local custom or whatever. As modest a setting it is lengthwise, it is still longer than what congregations normally expect. But don’t let that keep your choir from offering it up. Finally, after you hear this piece, I hope you’ll get the connection between the famed catacomb fresco and the tenderness of this setting.